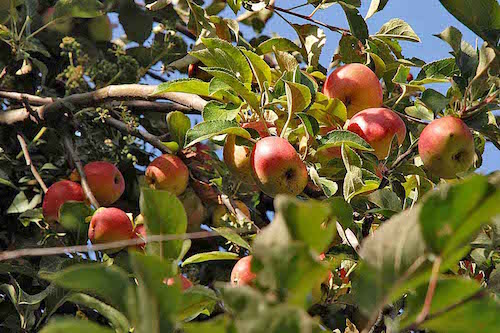 Hugh Mason, a Canadian professor, specializing in classics and Lesvos during the times of Longus, has been searching for the apple orchard described by Sappho in one of her poems*. She called Aphrodite to come from Crete to her apple orchard on Lesvos, a heavenly garden full of the scent of apple blossoms and spring flowers. Longus also wrote a lot about apples in his pastoral novel Daphnis and Chloe, as the island then was full of apple trees.

Hugh Mason didn’t find Sappho’s so idyllically described orchard, nor any other apple orchard: at least, not in the region of Eresos, where Sappho was born – nor around Mytilini, where she lived. It is many centuries ago that Sappho wrote her poems (she lived around the 6thcentury BC), since when the climate on Lesvos has changed very little, but where in the agrarian sector, plenty of changes have taken place, like the advance of olive cultivation. Had Hugh Mason been looking for an olive tree, bowed over Sappho dreaming of apple blossoms, he would have had a better chance, because olive trees can reach a ridiculous old age. Up until the Seventies you could find near Athens the olive tree (estimated 2400 year old) in whose shadow Plato once sat teaching his pupils – until a bus bumped into the tree. Apple trees do not have the energy to live out even onecentury, so Aphrodite’s apple orchard will only survive in the poem of Sappho.

Longus’ apple island however does continue to exist. Early in spring, the dark mountain slopes will light up with plenty of flowering wild apple and pear trees, like a sparkling christmas tree. Around Agiasos the apple blossom festivity is even greater, because there they cultivate crab apples, which are just a bit bigger than their wild equivalent. In autumn they are sold along the roadside in Megalo Limni. A friend with a fairy tale like property near Skalochori is blessed with a little apple orchard full of those tasty little apples, where you could easily imagine Sappho sitting amidst the blossoms, calling out for Aphrodite. Other friends, in Anaxos, have one cultivated apple tree that bears so many huge green apples, that you can fill an orchard with them.

I have a house full of apples from Skalochori and Anaxos, all of which remain good long into the winter: an ideal basis for puree, soups, chutney or pies. Apple puree belongs to the classic Dutch child’s menu. It is very easy to turn this puree into one for adults, by adding a red pepper, salt & pepper, ginger, cinnamon, cumin and coriander, eventually even a splash of cream: a delicious side dish when eating chicken or liver.

Greeks might have a big laugh when you tell them apple puree or a milo soupa is on the menu. Just let them have a taste of this apple soup, as a starter for a Christmas dinner — they will love it. Use as many fresh ingredients as possible:

Heat up the oil in a big casserole, fry the chopped onion, ginger and pepper until the onions are transparent. Add the spices, fry for 1 minute, then add the pieces of apple. Fry for some more minutes while stirring, then add the bouillon. Let it all simmer for ½ hour and blend it. Add salt, pepper and lemon juice according to your taste.

Chutney has its origin in India. Alexander the Great, having conquered half of the world, introduced so many new fruit and vegetables to the Greek kitchen, but must have forgotten to send some chutney to his homeland: chutney is pretty unknown in Greece. The Greek meat normally gets very well done and just occasionally needs to get pimped up. But Greek sausages with chutney seems to me a perfect combination, just like it will be great on the Christmas menu when rollade or game is served: a refreshing addition to the dark taste of the meat.

Put all ingredients in a pan and let simmer for 30 to 45 minutes. Take out the cinnamon and fill sterilized jam jars with the hot chutney. Close the jars, put them upside down for ½ hour and when they are cold, set aside in a dark area, where they can be kept for some weeks.