About asphalt and a coming disaster in Skala Eressos 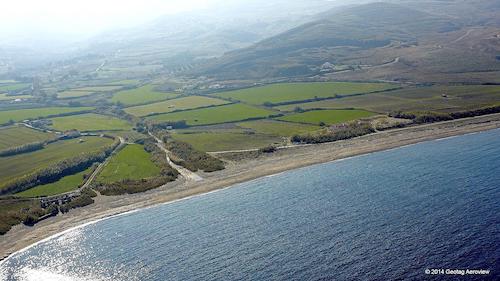 Skala Sykaminia is a little village, known for its little church atop a rock on the sea’s edge. It is the location for the famous novel The Mermaid Madonna by Stratis Myrivilis. The place with its picturesque harbour is popular with tourists. A few years ago it became famous because some of its inhabitants, who because of their inexhaustible help for refugees were nominated for the Nobel Peace Prize. Last year it again was mentioned in the papers because one of its inhabitants, transgender Dimitroula, disappeared. She famously paraded through the village in women’s clothes. After children broke into her house, forcing her to dance amongst other things; Dimitroula lost her mind and was transferred to a psychiatric clinic in Athens. She escaped the clinic, was hit by a car and died.

Skala Sykaminia can be reached over an asphalt road that descends from the mountain village of Sykaminia, or by a dirt road, that swings along the coast from Eftalou and over some mountainous landscape. Eftalou is known for its beaches and a hot spring. The road to the village with the Mermaid Church – along with another hot spring – might be the most popular walking route on the island. Even though cars regularly take this bumpy road, it will be very sad when this beloved road gets paved with a thick slab of asphalt. For years there were rumors that the asphalting was going to happen and now it seems that time has come. I have no idea who will benefit from this; Skala Sykaminia is just a tiny village that can already be reached over asphalt through the higher coastal road.

There is some asphalt craziness going on on the island. Other roads are in the pavers’ path, like the dirt way from Liota to Lapsarna, a beautiful route along a complete deserted landscape. As far as I know this road is not too busy with walkers, so making this road more accessible might be a blessing for the island: a great drive for people by car, moped or bicycle. When they make this road to Lapsarna – a long deserted beach with just a handful of holiday houses – they also should make an access road to Sigri, which is just beside Lapsarna. You have to cross only one mountain to reach the valley leading to Sigri. The problem with this mountain is that the farmers whose cattle and farms are on the slopes, have been closing all roads and it is a lot of hassle to negotiate all the closures. It also is a road not to be done with a normal car: even with a 4 wheel drive it is a hell of a ride.

The Eftalou – Skala Sykaminia road being asphalted is a small touristic disaster. Skala Eressos is also waiting for a lot of misery. This small, very old coastal village has one of the few big sandy beaches on the island, enjoyed by lesbians and other tourists. The village consists of small tourist accommodations, it has a boulevard filled with wooden boardwalks that are built over the beach and it has an enchanting wide view over the blue Aegean and the mountains. There is a relaxed atmosphere and it is mostly lovers of nature who pass their time there.

Some entrepreneur has also been seduced by its beauty and decided to make money out of it. His project for a hotel with houses, bars and other touristic paraphernalia on the middle of the beautiful beach has found an ally in the municipality. In Greece beaches are for everybody, so there is no way you can build something on the beach. But smart businessmen always know how to get what they want, and possibly in Skala Eressos. Most inhabitants and fans of the little village are furious and regularly hold protest events. We all know what might be the outcome: big money always wins.

I suggest that this bad-boy developer builds his emporium on the beach of Lapsarna, also a beautiful place, however still completely empty. He just has to share the bay with a few houses and I am sure he can fill it up with bars and sun loungers. Pretty soon there will be an asphalted road going to Liota and its great taverna and who knows, with some pushing, there also might come a direct road to Sigri, where this year the new ferry harbour will open. Not a bad place at all.