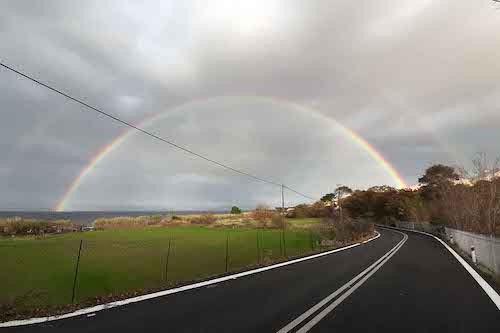 After people survived the deluge, God promised that the earth would never again have to endure such a catastrophe. According to Genesis, God sealed this agreement with a rainbow and each time this colourful miracle appears in the sky it is a reminder of this pact.

During the last month of the old year, the sky was full with bulging clouds that gathered to fill up rivers, while the sun used her light powers to disperse those masses of clouds. Each time that glittery super hot star had performed, a rainbow celebrated her victory.

Once I saw so many rainbows on Madeira that I called it the rainbow island. But after this past December I also ascribe this name to Lesvos. Rainbows kept on appearing. There is a legend saying that where the rainbow touches earth, a pot with gold is hidden. Were this true, the whole of the Aegean would be full of treasures.

It is not clear who invented the rainbow. The ancient Greeks said that the goddess Iris takes care of this bow full of colours and that is why this natural phenomenon was named after her: Iris – in ancient Greek. Modern Greek however has a totally different word for it: Ouranio toxo.

Iris was a messenger, using the rainbow as a connection between the Olympic Gods above and the earthbound mortals beneath. The ancient Greeks did not all agree how Iris actually functioned as a courier. She not only climbed up and down the rainbow, but also wore winged sandals that transported her at huge speed all over the earth. Sometimes she was depicted with large golden wings on her back.

Writers also disagreed about Iris’ profession. In most stories it is the god Hermes that is the messenger. In the Iliad however, Homer depicts Iris as the chief messenger. She warned king Menelaus of Sparta that his wife Helena has been abducted by the Trojan prince Paris. It was she who encouraged the gods of the winds to light the pyre where Achilles wanted to bury his best friend Patrocles who had been killed in the Trojan war. Hermes did appear in the Iliad, but with only minor duties. Maybe he was just an apprentice then, because in the Odyssey he got the leading messenger role.

Or maybe Iris was not good at her job. When Persephone was abducted by Hades and taken to the Underworld, her mother Demeter was so tearful that the earth dried up. Iris was sent by Zeus to  persuade Demeter to lift that punishment, but Iris returned to Zeus empty handed. After her short messenger career she went to work for Hera and regularly had to do the dirty work. In a story by Euripides, Iris had to make Heracles crazy, so that he would kill his sons.

After the Greeks, other gods took power over earth. But rainbows kept on appearing. There was a pretty long list of international scientists explaining this natural phenomenon, starting with Aristotle who saw the rainbow as a reflection of sunlight against a cloud. Later several Arab scientists published their theories and calculations, after which Descartes also had a say. It was around the beginning of the 20st century that the rainbow finally was explained to everybody’s satisfaction.

We could see the corona virus as the wrath of the gods — as a punishment for slowly destroying Mother Earth. That we are doing this is proven by plenty of scientists. Iris can climb as much as she wants up and down the rainbow with heavy warnings from the gods, but the world does not listen. Covid feels a bit like a new deluge, but God clearly reminded us last month of the pact with the many rainbows.

There is no scientific proof, nor are there any legends, saying that rainbows bring luck. But most people become happy at seeing a coloured Iris in the sky. Let’s see that as a positive sign.

I wish you a new year full of rainbows.