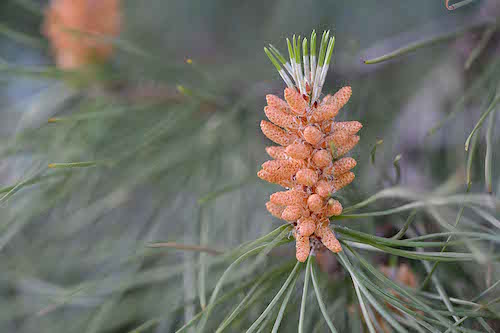 Some people who, in spring, praise the abundance of nature on Lesvos, have runny noses, sore throats or watery eyes. Spring in fact can be pretty dangerous — for people with pollen allergies.

Driving through one of the island’s many pinewoods, I noted that the ground was covered with dirty yellow pollen. It is an interesting phenomenon how gusts of wind whirl the yellow pollen off the pine trees into the sky. The first time I saw that, I seriously thought there was a wildfire. Pine pollen however are not that bad, it even can be very healthy.

Food guru’s have impressive lists of things that can be cured or benefit from pine pollen — like the heart, liver, brains, vitality or growing older: it can be the medicine helping you to reach the age of 1000! These yellow fruits that make the pollen, can be eaten. According to pollen collectors, they have a crispy, juicy taste, just like a Christmas tree. I have never tasted a Christmas tree, and I’ve also not yet had the courage to taste these pine fruits, although I love pine nuts, but they don’t taste like a Christmas tree.

I now regret, that after such a cloud of pollen passed the house and I had to clean garden furniture, terraces and steps, I didn’t collect the yellow powder: I could have collected kilo’s of this magic dust and could have sprinkled breads and cakes with it. You could even make yellow rice with it, or a pine-apple-cake: super healthy! If I ever find the spare time I’ll have a look at the culinary benefits of pine pollen.

But first I have to survive the spring, because these months were not easy. Before the pine trees showered the house, there were days with clouds full of Saharan dust, that veiled the sun and as soon as there was a bit of rain, everything got painted pink. That’s when the throat started to itch. After the pink Saharan sand came the yellow pollen rain and now I am waiting for the olive trees. Thanks to the wet winter they are so happy that they’ve covered themselves with masses of cream blossoms, hiding their usual green colour. Olive pollen is much smaller than pine pollen andmore dangerous to pollen-allergic people. So whenever your nose starts crying or you sneeze the clouds out of the sky, you know who to blame. I wonder if their pollen will also descend upon the house, car and garden in a cream cloud and provoke the umpteenth spring cleaning

The oceans of flowers all over the island might be nice; but around my house there is also a wild growing of different plants, these are called weeds. Getting rid of the weeds is another spring duty and after so much winter rain it is a pretty heavy burden because all the seeds have decided to grow. It can hurt your back and knees. Pulling out all that greenery, to make the roses visible, I encountered hundreds of snails. So much that I wondered if somebody had secretly started a snail farm in my garden. I have never seen so many. I could have made hundreds of dinners out of them. I could have preserved them in tins, but the rulesin Greece are that you only collect snails after the first rain áfterthe summer. I wonder why. I could have made so many jars with preserved cooked snails on pine pollen juice.

Now that the abundant rainwater is finally starting to dry up, Asian Tiger Mosquitoes (Aedes of Stegomyiaal bopictus) have suddenly appeared. I couldn’t believe that there were Tiger Mosquitoes in Greece. I thought these white and black striped insects were other flying wild creatures. But no, the Tiger Mosquito has reached the island and taken advantage of the wet winter: in the night, clouds of them now attack the lit windows. As long as there are no tropical diseases like dengue carried by those striped attackers they are not really dangerous. Their sting might only hurt a bit.

They prefer to live close to water and lay their eggs in even the tiniest bit of stagnant water, and there’s plenty to find due to all the water that flooded the island. The females only fly 200 m away from their birthplace and all Tiger Mosquitoes live only 1 to 2 months, so you can make their lives difficult by getting rid of all those water pools around the house. But then Spring also has to cooperate. Until now, just like the winter, she has taken her time and only brought cold evenings and clouds that kept on besieging the sun and now and then some rain. As yet, there has been no night warm enough to sit outside amidst the pollen and Tiger Mosquitoes. I’ve had it with the capricious weather, stinging insects and emerging weeds: I want a summer to scorch all the Tiger Mosquitoes, snails and weeds until only some grey pest-dust is left.