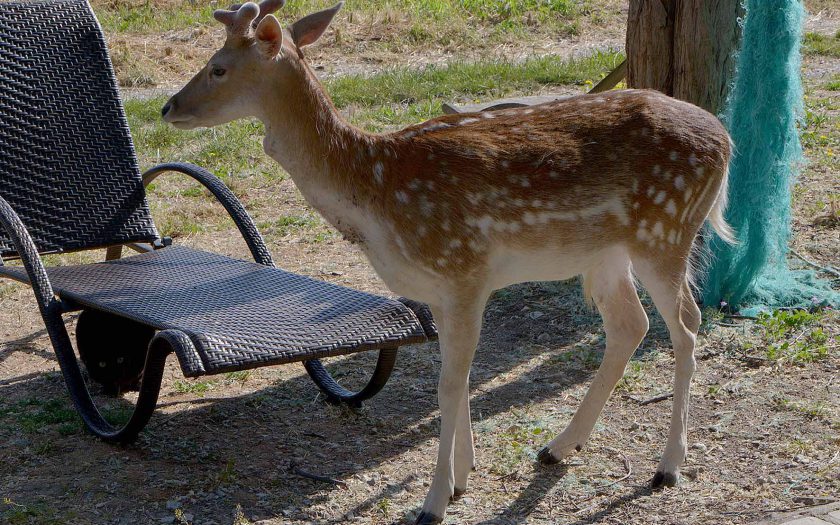 One lovely morning I came eye to eye with a beautiful white speckled fallow deer on my terrace. I rubbed my sleepy eyes in order to wake up, just as the deer was surprised to see another living soul on the terrace. He didn’t hurry away but patiently looked me up and down with his sweet, big, dark eyes and then took some perky steps into the garden en route to the pear tree, which apparently has tasty leaves.

Of course it wasn’t the first time I have seen a deer. But never on my terrace. Deer officially do not belong to the wildlife of Lesvos. You may find deer on Rhodes; there they have wild fallow deer, called Deer dama dama, a special kind only to be found on Rhodes. At the entrance to the Mandraki harbour, where once the spreading legs of the Colossus of Rhodes stood, you will find the symbol of that Greek island: two deer. It is said that deer were brought to the island by the crusaders, but I really wonder if crusaders had deer tagging along on their risky journeys. Others say that deer had been living there centuries before Christ was born and that the island was then named after deer: Elafousa (island of deers).

Yet on the small island Elafonisi, also named after deer, just alongside Crete, there are no deer but only pink beaches. It is on the island of Lemnos where you can also find deer, but they were brought over from Rhodes. To protect the Dama dama for extinction, some of them were taken to other Greek regions. On Lemnos, with its famous sand dunes and just a few woods, these deer can only survive when their food is topped up by the municipality.

The deer you may meet on Lesvos, hop behind fences on the grounds of monasteries (Limenas) or garden restaurants like Eden of Bey and even not far from Akrasi, close to the junction to Drotta, is a kind of deer farm. I suspect that the deer on my terrace (maybe also a Dama dama) escaped from a garden of a deer lover, somewhere above Eftalou, just past the garbage dump where, enclosed by lots of junk, a handful of deer meditate. The beautiful animal on my terrace didn’t eat from my hand but I could easily do some sweet talking, while he patiently listened at two meters distance.

This Bambi, who has for two months now roamed the area, seems to have set his shyness aside, made friends with my dogs and regularly visited our fields. I did however worry: what if he went to the road, or what if he comes daily to drastically prune my garden? Such a deer is a lovely sight, but it also must eat and according to the traces I have found of his misbehaving, he loves rosebuds and the leaves of fruit trees.

Eden of Bey, not far from Aya Paraskevi, with a kind of little ZOO, lovely gardens and a good restaurant, would like to have the Dama dama. But how to catch a deer? I consulted different people, but that didn’t bring a solution. Afterwards I wondered if I’d better not make it public that there was a deer running around in Eftalou: that could attract hunters who would not miss such a tasty opportunity. One day I heard rifle shots in the not too far distance. Bambi has not been seen since and I am afraid that there are some people who have had a delicious venison dinner.

It has however solved the problem of the garden. Shortly afterwards while managing the damaged roses, a monster appeared in my sight: an enormous wasp! The colossus nestled a bit on a rose just in front of me, it gave me some minutes to have a good look at him: he was quite a bit bigger than a hornet (Vespa cabro), it had surprisingly blue wings and two remarkable yellow spots on his lower body. After viewing lots of horror pictures of wasps on the internet, I could identify it: a Blue Winged Wasp or Digger Wasp (Scolia dubia). I was happy to read about his strange diet: he loves beetles! Now that the deer no longer touches my roses, another pest had settled on the flowers: white striped black beetles feast upon the delicate rose leaves. I have no idea from which ZOO the Blue Winged Wasp escaped, but I bet it’s better to have a Blue Winged Wasp in your garden than a Dama dama.