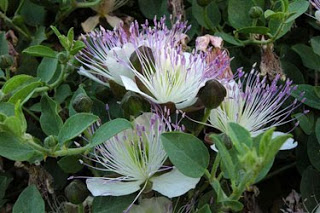 We now know pretty much of how the Greeks used to eat in earlier times. Through books of old philosophers and writers, but as well thanks to pottery digged out of the earth and archaeology scientists can imagine how the kitchen of Antique Greeks once looked like.

They used to eat lots of bread, until the fifth century BC mainly barley bread. Other grain bread came later, with grain that first was imported and later was grown in Greece itself. Bread was mainly made home or baked in communal ovens. When the choice of different bread became bigger, there came as well the first bakers in the Greek cities where you could buy bread.

Breakfast and lunch for the old Greeks consisted mainly of wine mixed with water and bread that you dipped into the wine and sometimes aside some dried figs or olives. Only in the evening vegetables and when it could be afforded fish or meat was served. As vegetables it were mainly beans and cabbages.

Spices were then not added to dishes for a new flavour, but were mainly used as medicine. Salt was used to conserve for example fish and onions were thought to give a man new strength. That is why Alexander the Great fed his soldiers with lots of onions. This way he hoped his army would last forever. From garlic as well it was thought that it could bring you special strength. That is why participants of the early Olympic Games eat garlic before the matches, although garlic was mainly used as a cure for bites and infections.

Capers as well were seen as a cure. Theophrastus (371 – 287 BC), who came from Lesvos (Eresos) and is seen as the first botanist, wrote that capers were a good carminative: they stimulate the blood stream in the stomach. Later they thought capers were as well good against rheumatism.

So capers may have been served sometimes as an appetizer (they stimulate the appetite) and maybe an old Greek may have served it as an aphrodisiac during a symposium (in Antiquity this was an evening dinner were guests were invited, only for men!), but a sauce or salad with capers was probably not yet invented then.

Here on Lesvos as well they hardly know the caper, even that on some places they grow abundantly. In some taverns they are served in a salad, like the one in Liota, but you will never get capers on a pizza nor a capers sauce served over ray (nor in the rest of Greece, I guess). There are even people living their whole life here on the island who do not believe that capers grow on their island!

I love capers and I now understand quite well why they are so expensive to buy. Harvesting capers is a hell of a job and you need time to do it because they are so small that you easily need an hour to fill a little pot. While strawberries, cherries, plums, apricots and mulberries are screaming to be harvested, you as well have to go on a caper expedition to pick those delicate flower buds on those prickly plants that grow on rocky ground near the sea.

When you once have picked them it is not a time consuming job anymore to preserve them like it is with other fruit that you have to peel or extract a kern. You just have to put them some days on fresh water and then put them in a pot with a mix of salted water, vinegar and some spices.

And when the pots are getting ready in your larder, all scratches from the caper plants are healed and the heatstroke caught during picking capers has subdued you will be delighted to use them on a pizza or in a beetroot salad. When you must believe the scientists the old Greeks who were rich had enormous and interesting banquets that they drank away with wine while debating and philosophizing. But I would not have wanted to live in that time. After Antiquity so many new products, like the tomato, eggplant and potato invaded the Greek kitchen that it totally changed. They may have had so many smart philosophers who wrote books about plants and grounded the medicinal science like Hippocrat (ca. 460 – 370 BC) did, but food is much better nowadays.