About plants that can destroy armies. 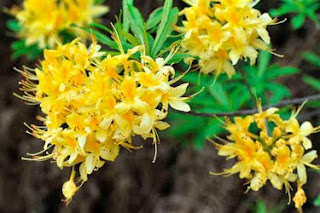 In spring Lesvos is just one big public garden full of wild flowers, but I already said that once. Last week I wrote that the flower of flowers is the orchid, but the nicest spring-attraction here on the island — and each year I have to mention them — is the rivers of yellow rhododendrons (Rhododrendon Luteum) that flow though the dark pine woods on the slopes of the mountains between Parakila, Anemotia and Vatoussa.

These flowers are not only beautiful to look at, but they smell like divine nectar. When you walk through the woods in the West their heavy, sweet scent is so heavy in the fresh pine forest air that you could easily become intoxicated. As long as you only devour them with your nose you’ll be all right, but don’t ever try to taste their honey.

Around 400 BC the two sons of Darius II of Babylon, Artaxerxes and Cyrus, got in a fight over who should inherit their father’s power after his death. Artaxerxes won and banished Cyrus to a remote part of Greece. There Cyrus gathered an army together and went back to Babylon to try and take power from his brother. He did not succeed, he was killed and his army defeated. Xenophon, a kind of war correspondent-historian who traveled with Cyrus, put the army back together and traveled back to where they came from. On the way they had to fight other enemies and in the country of Colchis they were attacked. They managed to break through a small division of soldiers and continued their way towards Trebizond in the district of Pontus. When they felt safe they stopped to rest and gather food. They found honey and ate plenty of it. That same night all soldiers — about ten thousand in all were left — became ill and behaved like they were drugged. It was lucky the Army of Colchis did not find them then, otherwise they all would have easily been killed. Centuries later scientists guessed that they probably ate from the yellow rhododendron luteum, also known as rhododendron Pontica because it’s in the Pontus area where they grow in profusion.

Honey can be dangerous if you buy it from a beekeeper that does not know the plants — there are many poisonous species which vary from slightly dangerous to very toxic. One of the best known, and very poisonous in Greek history is hemlock. It is famous thanks to the death of one of the greatest philosophers. In 399 BC Socrates was accused of neglecting the Gods who were ruling in his time and for speaking about ‘new gods’. He was judged to be a bad influence on youngsters and was given the choice of exile for life from Greece or death by drinking a cup of poison. Socrates chose the latter path and it is said that the poison he drank came from the plant we call hemlock (Conium maculatum).

Hemlock looks a little like chervil and can grow up to two meters high. It is an inconspicuous plant in the Greek landscape. Its juice however contains nerve gas that in a small quantity can be fatal. So you better stay away from conium maculatum, or hemlock.

But tell that to the birds! They have no problem eating hemlock seeds and seem to like them without suffering any ill effects. However, there is a problem if the birds that eat hemlock seeds are themselves eaten — by humans. On Chios some people who ate partridges shot during a hunting expedition fell ill and after an investigation it was found that, yes, it was the seeds of the hemlock that caused their illness.

Whenever a volcano erupts and spews huge clouds of ash, stone and glass in the air that endanger airplanes, it is understandable that they have to be they grounded. So maybe you might think it might be forbidden to hunt birds on Chios in case they are toxic — so in that case, better to leave them in the air than bring them to ground, or the dinner table? But no, the people of Chios want the impossible. Like trying to catch the dangerous volcanic clouds up in the sky, they now want to destroy all the hemlock on their island.

Everybody who has been to Chios or any other Greek island knows that it would be an impossible task. Who would go and eradicate the plants on the islands and regions that are uninhabited? Would not the birds that fly there bring back hemlock seeds? And who could guarantee that no birds from Lesvos ever made a little trip to Chios, having consumed a swathe of hemlock seeds? Should the airspaces between the two islands be closed to bird traffic, or wouldn’t it be simpler to just but a ban on hunting them?

We must hope that no beekeeper falls in love with the magnificent yellow rhododendrons and puts his beehives close to their wonderful flowers to get that marvelous aroma in his honey. If that happened the people of Lesvos might then have to go off into the volcanic regions of the island—where the abundant crops of wild rhododendrons can be found— to pull up or destroy the flowers with weedicide. That would be a great loss of one of the most beautiful attractions of Lesvos in the spring.