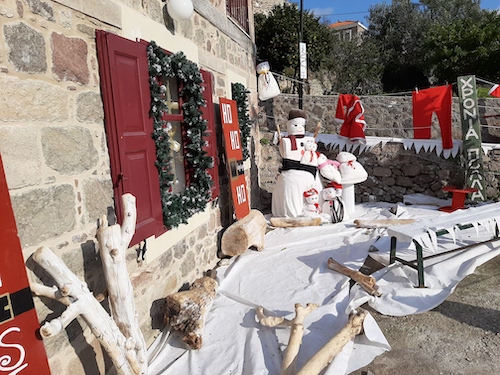 This year people on the island were very early with their Christmas decorations. It was barely December when the first Christmas lights were rocking in the wind. It must be because these dark covid-days are just begging for some extra light; especially now that the winter seems to have arrived so early. The first layers of snow have spread over the mountains, making a colourfully decorated tree all the more welcome.

Martin Luther (1484 -1546) must have thought the same. When this German founder of Protestantism walked amidst evergreen fir trees in the snow, as a surprise for his six children he took one tree inside and decorated it. The sky with its shining stars was copied with candles placed on the branches. And so, as the story goes: this was the very first Christmas tree.

The idea of Christmas balls seems to have come all the way from England, where in the 17th and 18th century they still believed in witches. For protection against these evil women, a glass ball was hung in the house or garden: if a witch looked into the ball she would disappear inside it. Another belief was that witches had no reflections, which such a shiny ball could easily prove. Another myth says that witches do not like to see their reflections, so they run when confronted with the mirror balls.

In the Vosges in 1831 glass blower Linder blew the first Christmas ball. Christmas trees traditionally were decorated with fruit and nuts but after a particularly bad harvest, very little fruit was left, Linder decided to blew balls for the tree. One of the many stories is that he took witch balls as an example.

From this time on, Christmas balls became popular. Glass blowers particularly from the Eastern Europe mastered the art of making all kinds and sizes of Christmas tree decorations. Up until the world wars however it was Germany that was number one in Christmas ball commerce, exporting plenty to America. By 1880’s millions of German Christmas balls were sold in the American Woolworth’s. Americans now are champions in lighting up for Christmas, although nowadays most decorations come from China.

It is not easy in Greece to find a real Christmas tree. There are islands that barely have trees. On Lesvos you have plenty of pine trees, but not the species that is used as a Christmas tree. Greek fir trees have limp branches, not made for heavy Christmas balls, and the branches are rather spread apart.

For centuries Greeks had something different to decorate during the dark days of December: a boat. It might be because of Saint Nicolas, the patron of seafarers, but it can also be as an expression of joy because around Christmas the fishermen came home after weeks’ long adventures on the sea. This way a little boat became a Christmas symbol in Greece. Nowadays the Greeks find it difficult to chose between Otto’s tree and the traditional boat. So now often you will see a decorated tree next to a decorated boat.

However his year there looks to be a new craze. In Molyvos and Petra there are some boats or trees to be seen, but it are other Christmas symbols that dominate. Wherever you drive or walk you bump into sturdy Santa Claus’, merry snow men, cute reindeer, elegant wooden sleighs, Nativity scenes, shiny stars or representations of Christmas dishes. It looks like the Kalikantzari have transformed into creative benefactors. Normally these evil gnomes terrorize the Greek households during the Christmas days (they spit in the food, cause the bread to burn or the pudding to fail). You must keep the fire going in the fireplace, if you want them to keep out of the chimney, their normal place of entry. Now all spaces and places are filled with homemade decorations, of wood or other eco-friendly materials. Never has the village been so inviting and no storm or cold can take away the warm glow it transmits. A big thanks for these comforting and pretty Christmas decorations.