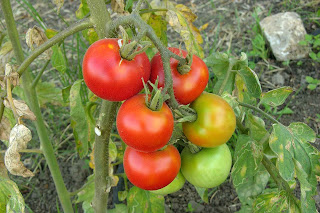 ‘Help, tomatoes’ was the name of a piece that I wrote more than ten years ago, when I was discovering Greek food. It seemed that all you ate was ‘infected’ with tomatoes. After all these years of eating Greek food, I have to confess that I too have become a tomato-junkie. So imagine when last week I went to the grocery store and I found only empty boxes: “Where are the tomatoes?!”, I screamed in panic.

A few weeks ago the Greeks had taken all the watermelons to the beach and the mountains of juicy green whoppers had totally disappeared. Then I congratulated the greengrocer for doing such good business. Now that the piles of watermelons are back, the boxes with tomatoes are empty. I threw the grocer an aghast look and said: “It’s not possible to have a grocery store without tomatoes!”

Tomatoes rank 4th on the list of most beloved vegetables in the world (although they really are fruit). Mediterranean and Arabic countries eat the most, Greeks and Libyans being the people eating the largest amount of tomatoes. In Greece fish, meat, vegetables and pasta swim in tomato sauce, and there is the famous village salad; you will find a decorating slice here, another slice there, a vodka here, a glass of juice there and before you know you it, you are at your limit: more than 100 kg a year. While I would have thought that the pizza and spaghetti country Italy would be at top: there will be no pizza nor pasta without tomatoes.

It is unbelievable that this pretty red fruit, within one and a half centuries, has taken over a whole kitchen. Greeks were – and still are – pretty conservative with what they throw in their cooking pots. When at the beginning of the 19th century the first elegant tomato plants were introduced to the Greek gardens of monasteries and of wealthy people, no one dared to take the fruit to his mouth, because the plant belonged to the lethal belladonna family.

But the first cookbook appearing in the Greek language (translated from Italian and published in 1827 on the island Syros) already had two recipes with tomatoes (then still called pomme d’oro) : fried and halved golden apples stuffed with pieces of liver and a hand full of herbs (that really sounds yummy) and butter-baked eggs in a sauce of golden apples, onions, sardines, basil, parsley and fish sauce. But I guess in those times housewives, even if they could read, didn’t use cookbooks (rather they referred to their mothers). It was only when in the South of Italy the tomato got married to pasta – in the middle of the 19th century – that tomato sauce slowly streamed into Greece, to really settle here at the beginning of the 20th century.

It is unbelievable that Holland dares to produce tomatoes: they are round and red, yes, they even resemble the golden apples, but they contain no sun, so no taste. Even though tomatoes consist for the most part of water, it is the 5 to 7% solid meat that makes the taste with more than 400 different aromatic materials, and all those love the sun, that is why the mediterranean tomatoes taste so divine. A tomato should taste sweet in the middle and a little sour near the skin. In Peru, the cradle of the tomato, they even thought the fruit had aphrodisiac powers. Maybe that is why those Greek summers are so hot, slow and long. Because all their food is spiced not only with salt, pepper and olive oil but also with this sexy fruit.

The beginning of the season had a good start thanks to the warm spring: so, excellent sweet tomatoes. Taking them in the hand you could feel they were firm and not too hard. Cutting them the juice immediately ran. A slice of such a tomato with just a bit of salt, pepper and olive oil conjured up paradise: Eve must have picked a golden apple from the tree. So I intended to make a winter stock for the freezer, cooking pure tomato sauce without any herbs and I will also dry some of them. But first I had to cook a great dinner for some friends. With my head full of ideas for tomato dishes I arrived at the grocery store. My plans evaporated as soon as I saw those empty boxes. I mean, of course you can make one dish without tomatoes, but a whole Greek dinner? Totally disillusioned I went home with an empty shopping bag, thinking so frantically about Greek dishes without those red rascals that a headache came up and I finally cancelled the dinner without tomatoes.

The next day there were just a few tomatoes in the still mostly empty boxes. I bought them all because I had heard through the grapevine that an illness had killed all the tomatoes on the island. There may be just a few tourists, but when there are no tomatoes on the fields, I will not be the only cook in trouble: how else can a Greek consume his average of one and a half times his weight in tomatoes.

Now the boxes are refilled with tomatoes. The rumour about this tomato-illness has not been confirmed. People do say so many stupid things. If you were to say that the refugees secretly come over at night from Turkey to steal our tomatoes, all the villagers will believe you. But it’s really the tourists who have picked up the tomato-battle with the Greeks: they try to eat twice as much as their average weight. Because yes, there are ‘some’ tourists, and the happy few who are here, fully enjoy the island, sun and sea and they eat all our tomatoes!