The two faces of Moria 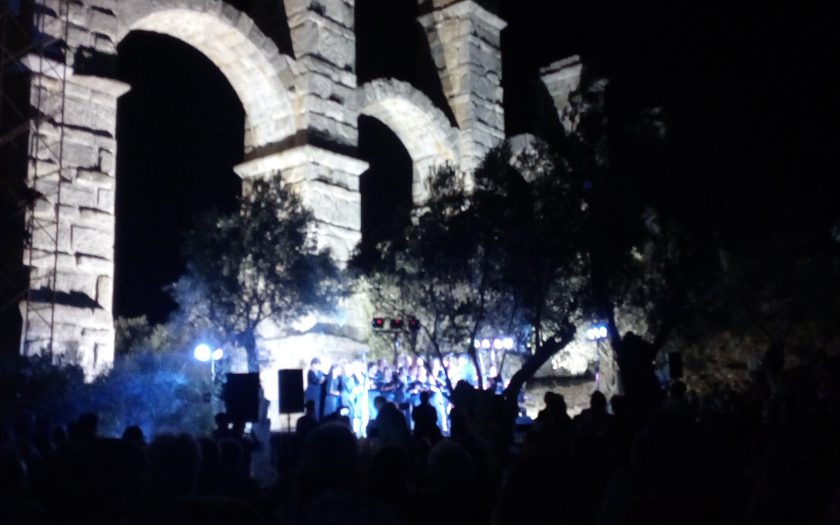 Moria is one of the many picturesque villages of Lesvos. Centuries ago it nestled itself in amidst green olive groves, north of the capital Mytilini. Its age is proved by archeological finds like a Byzantine, a Greek and a Roman cemetery, a pottery and Roman baths. The showpiece however is a 170 metre long Roman aqueduct, that with seventeen arches still remains steady in a beautiful landscape.

It is unclear who had the aqueduct built (or who paid for it). It might have been the Roman politician and architect Marcus Vipsanius Agrippa (as a friend and son in law of emperor Augustus, he wanted all citizens of Rome to have access to water), who spent between 23 and 13 years BC a few years in Mytilini. It also could have been the Roman emperor Hadrian, who had aqueducts build in Athens and Pergamon and also stayed for some time in Mytilini in 124.

The water came from the feet of Olympus, known for its many springs, and from Megalo Limni. It flowed from there, sometimes aboveground, sometimes underground, over valleys and through mountains to the capital. Sections of pipes and canals have survived until now, but the aqueduct at Moria is the most significant part of this miraculous huge water work that still remains.

Such a long waterway only works when the descents have been competently calculated. So thanks to smart Romans Moria became the city of the aqueduct. They were proud of this heritage. But now they cry a lot. Speaking about Moria nowadays means talking about the refugee camp Moria, situated in the same region. Most people don’t even know that a charming village named Moria exists which, contrary to the overcrowded camp, is an oasis of tranquility. The inhabitants of this ‘invisible’ village, that live off their olives and gardens, are not against the refugees. Although they sometimes can loose their patience when yet another olive tree, chicken or sheep disappears. They feel abandoned by Europe, the Greek and even the island’s government. They feel undermined by the uncontrolled growth of the camp and fear more and more the insanitary harsh conditions that cause water pollution and bad smells.

Molyvos, far away from all the camps and determined to ignore the refugees, had a swinging music program last August, where not only the music was great, but also some of the locations. Along with the tango and guitar festivals was the Molyvos International Music Festival which started with a tour all over the island (and even one in Chios). Concerts were presented in a hamam in Mytilini and a monastery close to Kalloni. The most fairytale like music event was at the saltpans in Kalloni, where atmospheric lights coloured the white salt mountains.

The jazz evening on August 20 at the aqueduct of Moria, organized to pull the village and its Roman treasure out of darkness, was equally beautiful. Here too colourful lights highlighted the ancient arches, while sizzling jazz notes streamed through the valleys. So the island produces titanic fights for positive publicity, especially in the summer months, when lots of inhabitants get some income from tourism.

Lesvos nowadays is – unjustified – a synonym for refugees, just like Moria is for camp Moria. And again the alarm bells ring because of an increase in the arrival of rubber boats full of refugees. Camp Moria, now populated with over 10,000 people, is desperate and no longer knows how to deal with the arrival of sometimes hundreds of people a day, while it already has to deal with a shortage of tents, medical care and problems of safety. The mayor, along with the many NGOs working in the camps, cries for help, but nobody seems to listen, just like in 2015. I am afraid that another shocking photograph is needed to remind stiff-necked Europe of the problem, because squeezed Greece just can’t handle it alone.

And Moria? Next year below the Roman arches it should be another festival, this time with music from the refugees. Already the sweet perfume of Arabian food floats through some of the streets of Mytilini, now we wait for the tunes of a thousand-and-one-nights to dance along to in the olive groves.