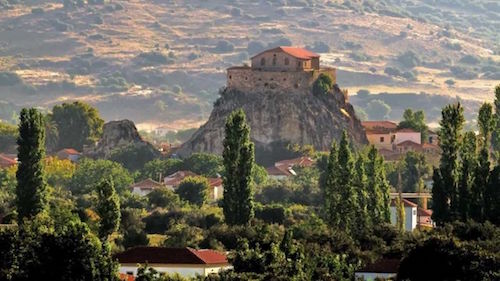 Greece is preparing for the big festivities around the Assumption of Maria on August 15th. This summertime Easter is more important than Christmas when Mary actually gave birth to Jesus in Bethlehem. She went to heaven far from her homeland: in Meryemana, a little hamlet near Ephesus, in Turkey.

Mary is an exceptional lady in different religions. Both the Catholic and the Orthodox Church believe that Mary gave birth as a virgin. That is why Joseph did not make history as the father of Jesus.

Orthodox believers, like the Greeks, see Mary as the mother of all people: Panagía. As primal mother she has countless nicknames, like the Healer, Star of the Sea, Queen of Heaven, Sweet Talker, Cause of our Joy, and so on.

The most important church of Mary on Lesvos is in Agiasos: Panagía Vrefokratousa (Mary and her child Jesus). From the beginning of August pilgrims come from all corners of the world to the island, to walk to this mountain village, that was founded around a smuggled icon from Jerusalem. The little painting not only survived iconoclasm, but also various wild fires that destroyed Agiasos and its churches.

On August 15th, for just a few days, Agiasos will look like Oia on Santorini, where tens of thousands of people gather daily to watch the sunset. In Agiasos this mass of people will slowly move to the rebuilt church to kiss the icon of Mary.

The other Mary pilgrimage on Lesvos goes to Petra, to the Church of Panagía Glykofiloussa, named after the icon Mary of the Sweet Kisses. Those kisses will be abundantly exchanged around August 15th, after the pilgrims have conquered the 114 steps leading to the church that is nestled on a towering rock in the middle of the village.

During these days many other Churches of Mary will be assaulted by believers, praying for a bit of hope in these difficult times. The church Panagía Evangelístria (Bringer of the Good News), on the island of Tinos, is the most popular place to go in Greece.

Mary is an influential saint, who manages to move masses of people just in Greece. Has anyone ever thought of Mary as a refugee? She came from Nazareth, a village in then Judea, where in those times the Romans ruled and Herod the Great was vice-consul. When this cruel ruler heard about the birth of the King of Jews he ordered that all children under two got killed in Bethlehem the birthplace of Jesus.

Mary and Joseph were warned by an angel in time and fled to Egypt. According to a painting from Rembrandt, Flight to Egypt (1627), Mary traveled with the baby on the back of a joggling donkey and Joseph walked in front. It was a miraculous journey: palm trees bending their crowns to baby Jesus, offering their fruit and springs in the desert spewing water spontaneously. They remained for some years in Cairo, before returning to Judea, as soon as the bloodthirsty Herod had died.

That was not the only time Mary had to take flight. Not all people believe it, but Mary spent her last years of life in Turkey, close to Ephesus, where she died and went to heaven. Mary was not an economic refugee, but probably fled due to the mounting problems between Christians and Jews. She was the mother of the crucified King of the Jews.

While pilgrims walk to the Panagía churches, refugees still arrive. Several boats a day reaching Lesvos is no exception anymore. The camp Moria, close to Mytilini, where most refugees go, has become more and more overcrowded with daily arrivals of about 100 people. Shortage of shelters and sanitation facilities create a satanic hell and even food distribution is becoming a problem. Welcome to Europe!

Because of this one camp tourism on Lesvos has decreased so much that lots of local families now face bankruptcy. Europe washes its hands pretending innocence, just as Pontius Pilate did after having Jesus condemned to death. Mother Mary, twice a refugee, does also not seem to bother.

There exists no Mary the Refugee, to whom refugees could pray. While so many people honour Mary, it might be time for Mary to let people know she is still around. Preferably in Camp Moria, where so much sadness reigns. The Pope himself came in 2016 to bless Lesvos. Now it is time for Mary to show up.