A pole here, a pole there 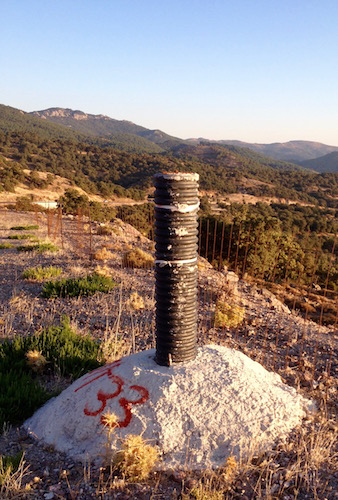 Indians make beautiful towerlike statues crafted from wood, called totem poles. Greek statues are not like poles or from wood, but mostly bronze statues of people, like the statue of liberty in the harbour of Mytilini, based on a design by the Lesbian born painter Georgios Jakovides. The road signs referring to the Digital Museum in Chidera, are better known than this artist. Digital copies of his work are shown there.

The island has a nice collection of streetlights: elegant poles wearing merry lanterns that cheer up many streets of some of the villages and little towns. Wooden poles with a simple light reign over the more quiet regions. The biggest challenge of any municipality is keeping them all burning during the dark nights, especially in the more remote areas.

The island does not have any poles designating borders. The frontier between Lesvos and Turkey floats on the waves, some six miles into the Aegean, where international waters separate the two countries. Because of this vagueness there always is some dispute about it. Nowadays it is ‘The Sultan of Turkey’ who ignores international treaties by claiming some of the Greek islands, amongst them Lesvos.

Other demarcation poles are plentiful in the Lesvorian landscape, mainly to protect pieces of land from cattle breaking in or out. There are plenty of Greeks who when making new fences, take the opportunity to acquire more land, especially when their neighbours have long absences. This used to be different, when demarcation lines were more difficult to move because they were stone walls. Many old stone walls run like lace over the bare mountains in the wild west; between the olive trees they have the burden of supporting centuries old terraces.

Lesvos once was famous for the craft of building enormous polygonal walls, that consisted of large stones whose many sides perfectly fit together. The best preserved example on Lesvos still proudly stands not far from Apothika (at the Gulf of Kalloni). The most famous polygonal wall built by Lesvorians is still to be admired in Delphi.

Piss poles are everywhere on the island, that is if you consider a tree as such when you are in terrible need. Greeks are not particular great wild pee-ers, or perhaps they do it very secretly, while many a tourist jauntily selects a nice tree along the road. The island just does not have many public toilets, so there has to be somewhere to go when in need.

Pavements on Lesvos – if there are any – are not protected by any iron poles (like Amsterdam has Amsterdammetjes) against bad parkers, even though the Lesvorians have this nasty habit of putting their car wherever they want. There are traffic poles, but these are to protect reckless drivers against oncoming dangers like a suddenly collapsed road, deep holes or parts of the roads overgrown by weeds. These are bright orange rubber poles with reflecting lights, that whip along when you give them a heavy punch.

New, rather enigmatic poles have popped up during the works that for years have been taking place along the new road from Kalloni to Sigri. Planted in a heap of cement, these one meter high pillars made from black ribbed plastic are filled with cement. They emerge along the new (not yet officially opened but frequently used) road between Skalochori and Vatoussa. When you continue on the old road towards Sigri, there are more to see: at irregular distances, marked in different colours with letters and numbers and clearly visible from the road or hidden between bushes.

They do not look like a base for streetlights, being too few in numbers. They’re also not alarm poles, an unknown phenomenon on the island. They look pretty sturdy, but probably wouldn’t stop a car flying off the road. Had they been placed in the most dangerous parts of the road, they could serve as terrific pedestals for little chapels that in Greece are traditionally placed where an accident with injuries (or death) has taken place. They are clearly not border poles, nor pillars for a future viaduct, or could they be a sign for a future tunnel to give goats and sheep safe passage across the road? That would be unique for the island. They are placed too irregularly to be indications of the road edge for those occasions when a blanket of snow spreads over the island. They’re certainly not climbing poles; but maybe a good athlete could pole dance with it?

What are they? An aide-memoirs of the long time it has taken to build this road, or to mark the scandals of runaway builders or – who knows – stolen money? But now the work is moving on apace, only slowed by sensational findings of more petrified trees. The contractor is clearly in a hurry. He might have forgotten to put a pole here and there.