The story of two moths 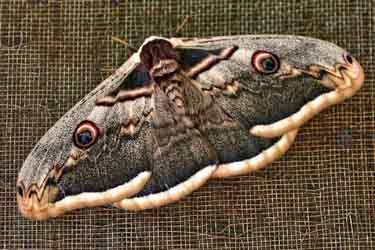 Moths are those boring light brown butterfly-like insects that invade your wardrobe and enthusiastically redo your clothes, is what I thought. The other day when a very big butterfly settled on my screen door, there was nothing about him that reminded me of a moth. This beautiful Big Emperor Moth (Saturnia pyri) is the biggest butterfly found in Europe – his wing span varies from 80 to 160 mm – so he is a real emperor; but in Holland he is named after the peacock’s eye on his wings: the Big Peacock’s Eye. He is an impressive sight, but I have to confess that I’m also a little scared by his huge hairy body and legs that bring to mind a tarantula. Years ago another Big Emperor Moth visited my house and even though I have many cats and dogs around, it remained on a pile of wood for days. Why did such a butterfly stay there so long?

I was amazed that this magnificent creature belongs to the moth family, which I usually only associate with those clothes devouring devils. In Dutch moths can also be called Night Butterflies, which I think is a better definition and a name much easier to associated with those colourful and elegant flying insects. The biggest difference is that moths fly at night and (day) butterflies like to play in the sun. And by the way, the European Peacock (Inachis io) is the Emperor’s little sister, which in Dutch we call the Day Peacock’s eye.

All butterflies lie eggs, producing caterpillars that start eating as soon as they can creep around. The caterpillar then change into a nymph, usually protected in a self-woven cocoon, which after some time produces a new butterfly. The Big Emperor Moth has the same cycle. As a youngster the big fat caterpillar is black with orange-yellow spots, then he becomes bright green with yellow spots that might change into a bright sky blue: such nice colours, just like a chameleon slowly changing colours. It is difficult to say which is the most impressive image of the Emperor Moth: the fanciful caterpillar or the butterfly that is a little grayish with dark red, brown, white and black.

The caterpillar world anyhow offers a wonderful collection of forms, colours and characters. The Oak Processionaries (also the Pine Processionaries) are renowned for their dangerous ‘hairshooting’. It is a great relief that the caterpillar that shoots with real poison, like the Giant Silkworm Moth, lives far away from Lesvos in South America (Brazil).

There is no danger in taking a closer look at the sturdy caterpillar of the Emperor Moth, because he is totally harmless. This creature feeds on the leaves of fruit trees in the warmer parts of the world, like in the south of Europe. And they had better eat their bellyfull because when they become a butterfly, there is no more eating. The butterfly stage serves only to produce offspring: a lady tries to seduce a man (who can sense her presence from as far as 11 kilometers), then they unite and the female lies eggs.

For days that Big Emperor Moth remained hanging on my screen door. After two days another Big Emperor Moth came and settled himself on the ear of the plush reindeer head that I have next to my frontdoor screen. Was it a female on the screen door that had attracted a male one? Were they going to produce offspring? I did not spy as to how they went about it. And anyway, on the internet (interpod) I read that their intercourse could last as long as 22 hours. One of them remained hanging on the screen door, no matter how hard or slow you opened or closed it and the other one nestled up to the reindeer’s ear, as if they were preparing for a long mating dance. But – reading further on the internet – the lifespan of a Big Emperor Moth is just one week! So there was no big love story developing between these two because they cannot live long and happy lives. Maybe the invisible mating dance lasted for several days, but without any result. I will never know because one morning the Big Emperor Moth on the screen door was gone and the other on the reindeer’s ear grieved for a day and then disappeared also.

If they’d had a quickie before saying goodbye, the new mother-to-be would have been in a hurry to lay her eggs because she had taken days to seduce her lover and there was so little time left. And then, thinking about the pictures of the Emperor caterpillars, it seemed that I knew them; I suddenly remembered that bright coloured caterpillar that last year had been in the cherry tree next to the front door. When I checked the photographs there indeed was for several days an Emperor’s caterpillar feasting on the leaves of my cherry tree. Could this butterfly have returned to her roots thinking that the screen door was her cherry tree?

The two moths did not eat a hole in the screen door, nor was the ear of the reindeer damaged. But why did they stay so long without moving? Maybe next year their offspring will return and then I will have a better look at what they get up to.