The song of retsina 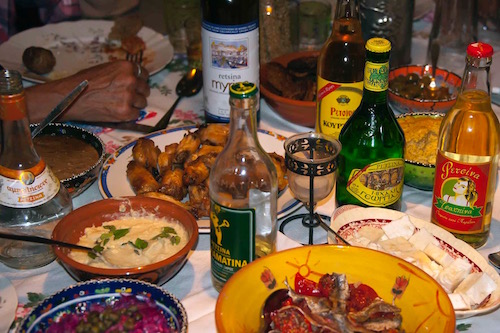 (A taste of retsina)

Everybody knows the Greek wine retsina. Many love it, many hate it: yuk, what a turpentine taste! The haters have probably barely tasted the wine, or it was many years ago that they took a sip. For them there is good news: retsina has been adjusted to modern times, just as the cheap bulk wines are now making way for the upcoming quality wines of Greece, retsina now has a milder taste and drinking retsina is ‘in’ again!

Resinated wine is at least 2000 years old, created to preserve the wine for a longer time. The insides of the porous amphora were plastered with resin from pine trees (Aleppo pine). This was the same material that they used to waterproof boats. Of course the taste of the resin got into the wine and so they said that this was a wine made with the tears of nymphs living in the woods.

Another story claims that when the Romans invaded Greece and started to seize the Greek’s precious wines, the Greeks added some resin to the wine. And so the Romans, not liking retsina, left the wine for the Greeks. It is also said that the Greeks did the same when the country was occupied by the Germans.

From the beginning of the last century up to the Seventies, Greece was very poor and masses of cheap wines, like retsina, were produced. When Melina Mercouri took exile from her country (1967 – 1974) during the colonels’ regime, she recorded music in France, like the record Delfini delfinaki with the song Melina Melinaki, a song about her grandfather:
“J’étais comme une reine (I was like a queen)
Assise à ses côtés (seated besides him)
Parmi les hommes d’Athènes (between the men from Athens)
Qui fument le narguilé (who smoked the water pipe)
Et boivent le vin résiné (and drunk resinated wine)”.

So retsina is a wine well known in musical history, because not only Melina Mercouri sang about retsina. You can find more than one song about retsina on YouTube, some sounding like the musicians had already hit the bottle, but that may be because of the age of the recordings: Retsina mou retsina mou from Manolis Fotopoulis, and from Michalis Geliotis, or this oldie from 1937, Me mia koukla retsina mou by Orestis Makris-Loudiana,!

The more modern retsina sing-song of Karsten Hagen Frank reminds of an evening with plenty of bottles of retsina on and under the table. We were not yet familiar with this song when, last week along with friends, we set up a table full of different kinds of retsina, in order to have a real wine tasting. Had we known the song, we probably would have ended the evening with this boozy song.

We started the evening with the beautiful bulbous bottle of Ambelisious (Αμπελησιοuς) from Thessaloniki, which had a strong but elusive taste of resin, which grew on the palet. We compared that one immediately with the retsina Malamatina (Μαλαματινα), also from Thessaloniki. This retsina is very well known and the most consumed on the island. I even found a Malamatina-song on YouTube, best to be listened after some glasses of retsina. However popular this retsina might be, our verdict about its honey-like taste was that it had an artificial, chemical taste.

Then it was the turn for the big bottle of Mirina (Μυρινα) which raised some problems. The men immediately declared that this was a sissy-retsina for the ladies! And indeed the ladies did love this slightly perfumed, airy retsina from the island of Limnos.

Next was an old-fashioned style retsina from the big wine company Kourtaki (Κουρτακι). This had a pretty strong resin taste; nobody liked this old, strong taste and the yellow liquor ended up in the bushes.

Poured into the glasses next was the retsina Michali Georgiadis (Μιχαλη Γεωργιαδις) from Thessaloniki. I like to drink this retsina, when it’s available in the restaurants, but my friends judged it as having a very light, flat taste, tinny on he tongue.

And then at the end there was the surprisingly sexy retsina with the difficult name Tsakpina (Τσακπινα) from Halkidiki, easy to recognize by its nice label: a blonde girl with a seductive face in the colours red, green and yellow (probably inspired by the Mini ouzo label). Even late this Tsakpina seduced us to the verdict of having a challenging, slightly sweet taste.

Our conclusion is that the ancient retsinas that tasted so strongly of resin are difficult to find nowadays. In the popular years of retsina, in Athens there were plenty of taverns that only sold this wine. A friend remembers such a place where a series of barrels were lined up in the tavern, marked with numbers, and you could choose from which number you would like to have a glass. Probably these numbers corresponded to the level of resin. The lower the number, the longer the wine was in the barrel and the more the taste of resin. If you wanted a drinkable retsina, you had to choose a number in the middle.

Nowadays consumers only like just a whiff of resin in the wine, a retsina not lying too long in a barrel; although nowadays the resin is put directly into the pulp when the wine ferments – so this whole barrel-number system no longer exists. But retsina is still popular, proved by this entertaining little movie about a bottle of retsina (sorry, again a bottle of Malamatina).

However, Malamatina is ‘out’, because in our retsina test it ended on the fourth place. The one we liked best was the Ambelísious, followed in second place by the swinging retsina Tsakpina. The ladies that night were in majority so in third place was the sultry Mirina. Michali Georgiadis ended as fifth (for me it should have ended as fourth) and the Kourtaki was judged as the worst retsina of that event.

Of course there are many more retsinas to taste in Greece. But most wineries will all have adjusted the taste to modern times: mild retsinas that can be drunk in the Greek heat, almost like an alcoholic lemonade. So tasty they are worth a song.