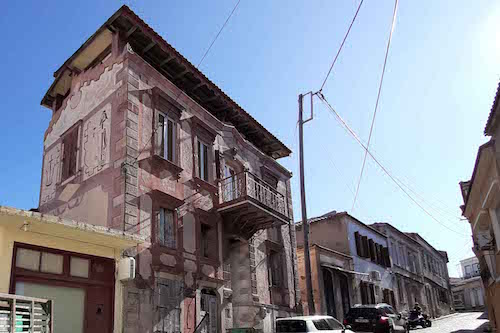 One of the small cities of Lesvos is Polichnitos. It’s surrounded by an interesting region where the remains of prehistoric animals are to be found (some so big, that you would not want to meet them on a dark night); the remains of the eldest settlement of the island (from the paleolithic era) have been found here and it’s here that steam from hot springs clouds above the colourful volcanic hills.

Lots of people know the name Polichnitos, many will have seen the chattering stork who built her nest on top of the high chimney of the ancient olive mill at the entrance to the village. The surrounding area is also well known: the long sandy beaches of Vatera and Nifida, the hot springs of Polichnitos and Lisvori and the cozy little harbour of Skala Polichnitos, and a little further along you’ll find flamingos roaming the salt pans. However only a few tourists venture deep into the village itself, even though in 1979 the little town was officially honored with the designation traditional village.

It is not easy to uncover the history of Polichnitos. When the Ottomans conquered Lesvos in 1462, there were troubled times in that area. The village was probably founded (or at least was first named) in that same 15thcentury, when crazy pirates scanned the coasts. The inhabitants of settlements along the sea had had enough of seeing their houses being burnt down, wives and daughters abducted and enslaved along with their men being killed. They went into the hills to start new lives in a place hidden from the sea. Polichnitos means: many settlements. The inhabitants of Nigada (possibly today’s Nifida) fled a bit later to Polichnitos, but also to Vrissa and to the island of Samos, where they founded a new village called after their beloved island Mytilini (the island used to be and still is named after its capital). Earlier the people of Vrissa had already moved their village to a safer place, where it now stands, but that was partly destroyed in 2017 by an earthquake.

What happened on Lesvos during the Ottoman occupation is mainly written of in Ottoman books — as maybe is this anecdote. A certain Papadimitriou used a ruse to obtain building permission for a big orthodox church in Polichnitos (building permissions at that time were only given for small churches) and so the Greeks built the Agios Georgios church in 1805. But the Ottomans discovered the fraud. The church was allowed to stay (and is still there), but poor Papadimitriou was executed. The beautiful bell tower alongside the church was built later, in 1892.

The 19thcentury was another difficult era. In 1850 the island was seriously damaged by a sudden icy cold that killed most of the trees and much of the livestock. At that time there were about 600 houses in Polichnitos. By 1863 545 Greek and 50 Turkish families lived in Polichnitos, but most of them gave up the difficult life on the island in 1867 when a big earthquake destroyed the village and surroundings. Most of them thencrossed the sea to nowadays Turkeytolearn new ways to better their lives on the island when returning. By 1894 there stood 1150 houses in Polichnitos.

In that same century Polichnitos was praised for its many schools. Alongside Turkish teaching, there was a Greek school for boys, and one for girls. They also had the first kindergarten of the island.

After Lesvos freed itself from the Ottomans in 1922 and after the following population exchange between Turkey and Greece in 1923, the little town had to welcome some 1000 refugees (some sources talk of as many as 2000). All these had to be fed, housed and provided with work. Of course that was a bit difficult, but eventually those homeless people of Greek origin were settled partly in the town and partly in Skala Polichnitos. From all those refugees 600 stayed to become locals. Nowadays there are about 1100 inhabitants in Polichnitos.

I didn’t count the houses during my recent walk through Polichnitos, but the streets were filled with plenty of impressive mansions and city houses, just as one would expect in any rich town. The traditional mansions of Polichnitos are square blocks of 8 by 8 meters, having two stories and a large cellar. Richly ornamented front doors, balconies decorated with elegant ironwork and other adornments give them great allure. Some are renovated, others doomed to wait until they will be restored.

There is one pink red house that has clearly tried to be a bit less traditional. It has an extra floor on top, rounded by an elegant porch, its side walls decorated with cryptic Egyptian-like art. The roof and brickwork are finished in a graceful style, all worth being a monument. This mysterious house is another reason to visit Polichnitos. And I wonder what exciting story this house has to tell.