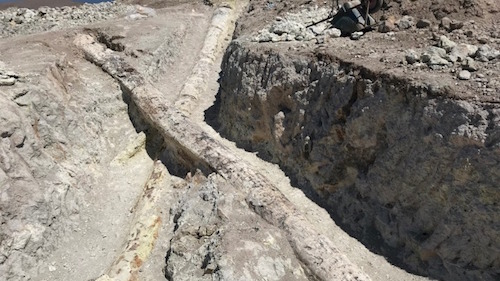 The Callicratis Project has failed: the five municipalities of Lesvos were amalgamated in 2010, but that has not worked out. Now Lesvos has been split in two. I have no idea of the geographical borders of the municipality of Mytilini and that of the municipality of West Lesvos, but just draw a line from the right of Kalloni straight to the top and voilà: two equal parts.

Many people might have forgotten, or even never knew, that in 2016 Unesco designated the whole island of Lesvos as one of the 127 Global Geoparks. West Lesvos should do more about promoting itself as a world nature park. Easily done, because in the past months many sensational finds have been made such as the discovery of many huge petrified trees during the installation of the new windmills and the making of the new road from Kalloni to Sigri. It is clear that West Lesvos has plenty of gold hidden under its grazing sheep and goats. They should dig up more to make an enormous park of petrified trees that will make even China jealous. They should reopen all the hot springs and make the numerous great beaches of the west more accessible. They should also promote more clearly the volcanic character of the landscape.

Because of the camps the municipality of Mytilini will be the ‘Refugee Municipality’. So that it is clear to all travelers: tourists go to West Lesvos, refugees and NGO’s go to Mytilini. Tourists will be allowed to land on the just-opened, new airport of Mytilini, but will be transported by armouredbusses to their tourist sector, in order not to have their holiday spoiled by seeing any non-Europeans. Tourists who think that even this is too much, can bypass all unpleasantness by arriving by ferry or cruiser at the new harbour in Sigri.

What would be great would be for Mytilini to proclaim itself a ‘Free State for Refugees’, so that they can make their own rules. Therefore an immediate exit from the European Union would be necessary.All refugees wanting to work while waiting for their travel documents could be placed in the villages of ‘The Free State’, and employed to help the locals with the olives, sheep breeding and in the fisheries. The more educated ones could help in the hospital and assist at the university of Mytilini. Families with children and unaccompanied children should be placed near Polichnitos, the little town famous for its good education. This could bring an end to overcrowded camps: there are houses enough to place refugees in different regions. ‘The Free State’ could also become as rich as Monaco by providing a workforce for countries that are short of manpower (Netherlands and Germany). ‘The Free State’ could offer a great variety of of workers.

I am afraid that a high wall would need to be built between ‘The Free State’ and West Lesvos. One wall, more or less, does not matter on Lesvos, they already have plenty of them and wall building is nowadays very trendy. For touristic purposes they could even copy the polygonal walls, once a speciality of Lesvos, like those still seen in Delphi.

The inhabitants of Skala Sykaminia were so good to the refugees that in 2016 they were nominated for the Nobel Price of Peace. Visiting this picturesque fishing village in ‘The Free State’ will only be possible with a tourist visa.

On many NGO’s ‘to-do-list’ is a visit of the Monument of Life Jackets in Molyvos, but just like refugees they are not very welcome in this medieval village, which would much prefer the monument to disappear. The mountain of life jackets however has not been easy to get rid of — not by fire, nor by hiding it under the new mountains of waste (Molyvos: shame on you for all this new waste!). If NGO’s still want to visit this memorial, they too will have to obtain a visa.

Just how our explosive world will finally turn out nobody knows. But a fact is that the commercially obsessed Europe is slowly shuffling to its ruin. After Brexit, there followed no Grexit, but Europe has totally abandoned Aegean islands like Lesvos, Chios, Samos and Leros, showing just what kind of inhumane club it has become.