The Gauguin of Lesvos 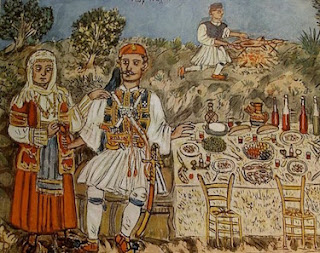 Greece 1965. That summer the country was experiencing a political crisis – the king having dismissed the socialist government. Setting up a new one caused demonstrations and riots in Athens. Amidst this chaos a large delegation of art lovers and some foreign consuls made their way to the island of Lesvos: on August 29th the Theophilos Museum would be opened in Varia, a little town now better described as a suburb of Mytilini.

The whole idea for this museum started with the friendship between a neurologist and an art book publisher, both coming from the same island as Theophilos. Angelos Katakouzenos was born in 1904 in Mytilini and went to France to study psychiatry. In 1925 he met Stratis Eleftheriade (Teriade), a Lesvorian who lived in the midst of the fancy art scene in Paris. Katakouzenos was also an art lover and many Parisian nights were spent in discussions about Picasso, Miro, Chagall, Matisse and others.

When, after ten years, Katakouzenos returned to Athens, he saw the work of Theophilos Chatzemichael and introduced this folklore artist to his friend Teriade, who also immediately liked the charming and colourful work of the artist. Theophilos had been crazy about history and often dressed up like Alexander the Great, but he had also warmly reproduced rural scenes where farmers and other countryfolk toiled: the Gauguin of Lesvos.

A year after Theophilos’ death, in 1934, Teriade exhibited some of Theophilos’ works in that temple of all musea: the Louvre. Katakouzenos began to dream about a museum on Lesvos and persisted in reminding Teriade about this project, but the Second World War and the following civil war in Greece made it impossible. Every week, together with his wife Leto, Katakouzenos received artists, writers and other art lovers in his living room in Athens. In 1947 he exhibited some of the works of Theophilos, but not all Greeks were happy with this event: ‘He hauled a communist into his house’ and more than a few despised this folkloric art. But Katakouzenos’ belief in the powerful and picturesque images of Theophilos remained strong – thinking his work was as good as the work of all those Parisian stars. It was as late as the turbulent summer of 1965 that his and Teriade’s project finally became reality.

Nowadays the museum is pretty well hidden in ever-expanding Varia, where villa after villa creeps up the mountain. It is in an idyllic little park, right next to the museum of Teriade that was created in 1979. It houses the bulk of ‘his’ masterpieces, like the art magazine Verve, huge themed books with beautiful work by renowned artists like Picasso, Matisse and Miro. Also the Lesvorian shepherd novel Daphne and Chloe from Longos got a new life in an edition with colourfull images by Marc Chagall.

While Katakouzenos’ name became big in the neurological world, Teriade became a famous publisher who was not afraid of the modernising artworld, but stimulated it further by publishing his revolutionary books. Although I intended to only spend time seeing the works of Theophilos, I was deeply moved by the greatness of this Verve serie where lots of artists showed their work, but it also is a great testament to that experimental art world. Theophilos never made it into a Verve publication, but he did get his own room in the Teriade Museum, just next to all these other world famous artists.

The Theophilos museum has been closed for years for renovation. Both drought and moisture have damaged part of his works and only half of the collection has remained in Lesvos, the others are in Athens for restoring. About one and a half years ago, without much of a notice, the museum reopened. It is impressive to stand right in front of Theophilos’ work. The many humorous details turn some of the works into comic strips. The museum before closing was also like a big comic book, with the works hung very close to each other. Now there are fewer works and more space: a pity, because just as Theophilos’ images are so full and rich, so was the former exhibition.

Part of Theophilos’ work was painted on the walls of cafenions. In exchange for a dinner, a glass of wine and a place to sleep Theophilos pepped up many a room, especially around Volos, where he lived for some years, as well as on Lesvos. Most of these fresco’s have been lost due to the weather, earthquakes and lack of care. Thanks to his patron Giannis Kontos, Theophilos lived for some years in a house in Anakasia, neaby Volos, where he decorated the walls with colourful historical events. Nowadays the Kontos House is also a Theophilos Museum. But it is mainly thanks to the friendship between two Lesvorians, who introduced him to the world at large, that an important part of Theophilos work has not been lost.