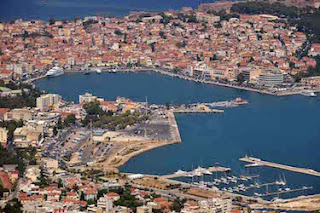 The Dutch writer Ilja Leonard Pfeijffer lives in the Italian town of Genoa, in his documentary Via Genua he refers to it as an African town. It is a new world where immigrants and local inhabitants have to make a life together. This is also our life and our future, because the flow of immigrants cannot be stopped. European history shows one flow of refugees after the other: most of our ancestors came from many different areas.

Lately, Lesvos has been in the news because of the tens of thousands of refugees that landed upon its shores. But although you can reimagine Genoa as an African city, Lesvos really cannot be considered a refugee island. There are plenty of people here who have left their own country, but they remain mainly in and around the camps near Mytilini. The capital of the island stretches out along two different harbours and is still full of signs of the once ruling Ottomans. Now it has been promoted from a provincial to an international town. Not only refugees from all over the world, but also a colourful assortment of rescuers walk its narrow streets and populate its various cafes and restaurants. Even so, Mytilini is still not Genoa: Greek life continues its traditional way, with students filling the cafes and gypsies begging for an euro. But the street crowds are more varied than before and more foreign businesses are opening their doors, like a Syrian restaurant. The Russian shop, mainly visited by Russian citizens, has already been there for years.

For sure, things are changing. A large number of people have found jobs in one of the many NGO’s or set up little shops around the perimeter of the refugee camps at Moria and Kara Tepe. The camps house thousands of people, who have to drink, eat and be clothed. This is big business, although I don’t know specific numbers. When passing the camps, the large number of parked cars gives the impression that there are as many rescuers and business people, as there are refugees.

There are many rescuers for whom this is now a way of life. Who doesn’t know the 27 years old Malaysian gourmand Rayyan Haries who, after seeing the tragic death of Alan Kurdi, jumped onto a plane (like many of the rescuers who then came to help) and set up a cooking unit at the north shores of Lesvos where most of the refugees landed. After the biggest flows were over he returned home but could not forget the island: this winter his broad smile (and food) once again lit up the different camps. His slogan: food is hope.

Not long ago I read the beautiful book The bone sparrow by the Australian writer Zana Fraillon. Even though her story is fiction, it provides an impressive look into the life in a refugee camp, where the biggest enemy is boredom. To combat this, in the camps of Lesvos there are playing hours for the children, different courses taught and regularly organized days out. One of the biggest challenges, whilst waiting for months, is to lead a human worthy life. Two boys from Syria are, as far as I know, the first vloggers of the island. The twin brothers show the daily life and its problems with a nice humorous touch: Basel & Murad in Moria.

And so Lesvos also enters the new world, with refugees, vloggers and rescuers. But like everywhere it is only the capital embracing the modern world. The rest of the island still takes a back seat, leaning towards the Middle Ages, with anarchistic farmers still do what their ancesters did, although with a mobile in their hand; the car has replaced the donkey, but the traffic rules seem unchanged and the fishermen still go out to sea in small wooden and rickety boats.

Not all of Italy is under the spell of refugees, nor is all of Lesvos full of refugees. New initiatives and the modern world slowly seeps into the streets of Mytilini, whilst the rest of the island remains its old traditional self and still a piece of Greece that’s becoming more and more rare.