The empire of stones 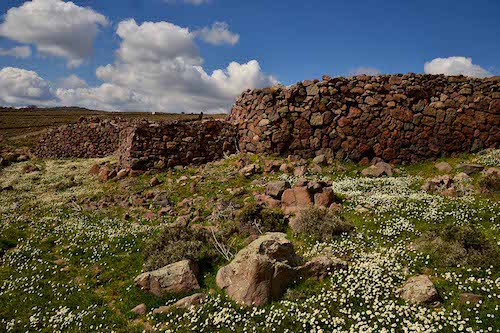 Lesvos has more stones than olives. You fall over them in the fields or bump into one of the millions of laid walls. There’s no piece of land without a stone wall. In the mountains they support terraces to prevent soil erosion. And do not think that on a beautiful Sunday a farmer says to his family: ‘Today we are going to build a wall to support an olive tree’. Building walls is a craft: especially drystone walls, where no cement is used, but where small pebbles are crammed into the wall to stabilize.

In the west of the island the landscapes seem only to consist of mountains and walls. At Makara, the huge numbers of thick walls have a rough beauty in the desolate landscape, taking your breath away. I used to think that they were built by boat loads of slaves, suffering under a burning sun or a lashing cold wind. But no, they were all built by craftsmen, who after a lifetime of working, probably left kilometers of walls.

Centuries BC they even built luxury walls, polygonal walls, consisting of multisided stones, that were seamlessly conjoined. Lesvos became famous for them. In the deserted area near Makara, where even a fool would never build a fancy wall, there however is one. It is not as impressive as the polygonal wall at Apothiki (not so far from Makara). The Makara wall has been victim to restorers (or amateurs), who gave the wall a new top, but they were clearly not specialists. By the 19thand 20th century there were no longer master stonemasons, that could configure huge stones like a giant puzzle.

Whoever put such an expensive wall there, must have had a thick wallet: the wall too precious just to keep the sheep in or out. Actually the remains of watchtowers have been found in the region. And where there are watchtowers, somebody must have been living there in fear of a mighty enemy. I bet that was not a sheep farmer. However, the civilization the stones hark back to is gone with the wind, whilst its walls still stand.

Stones: always a sign of wealth. At the beginning of the 20th century the Ottoman still ruled over Lesvos, though the Christians became more numerous and more rich. There was such prosperity that instead of building houses with wood and mud, they made houses of stone. Not perhaps for the sheep farmer, but for the traders and the middle class that arose from that economic golden century. Houses, factories and churches: their number will never be greater than that of the walls, but the villages expanded.

In the recent published Greek book Οι πετραδες της Λεσβου (Stonemasons of Lesvos) by Christos N. Chatzilias, stone workers from the period 1850 – 1950 from Skalochori and Anemotia are praised. These are not the most beautiful villages, but obviously what’s important is that their stonemasons went to work as far off as Israel and the Black Sea. It also were stoneworkers from Skalochori who built the important church Saint Therapon Church in Mytilini.

Wandering through Skalochori and Anemotia, there are no outstanding houses like in Polichnitos or Vatoussa, nor a special way of building like you’ll find in Pterounda, where they used local stones to build.

The book does not contain pictures of showy houses, just plain discrete houses, sometimes with details of interest. It’s a rich book, with old and new photographs, that makes the stoneworkers from a century ago into heroes: hard working villagers, not elites, but top class workers.

Studying the stones you can read history. Lots of ancient buildings, like temples or castles, were destroyed by the enemy or earthquakes, but also by the people who re-used the stones for a new house or whatever. In earlier times they were not concerned for their cultural heritage. It might have been that there once stood an imposing building not far from Makara. Its stones now probably resting among all those endless walls.

Nowadays they still build houses with stone. But again it is only for the elite, bricks and cement being far cheaper and no need for stone masons, which are difficult to find. The question is what will remain of our time, when centuries on curious archaeologists start digging again. The polygonal walls seem fairly indestructible, and of all those millions of walls I bet lots of them will keep on standing. Stones do have a near eternal life. Cement does not.