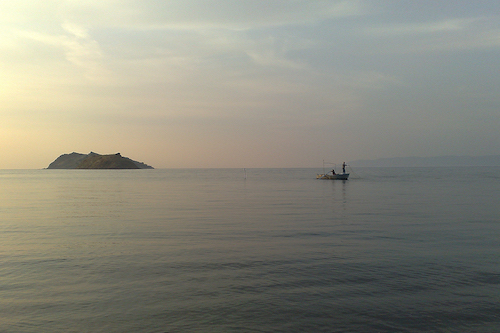 A long time ago I read the story about a German couple, they were utopians, that a century ago started a new life on Floreana, a deserted Galapagos island (The Galapagos Affaire  by John Treherne). They hated the upcoming industrialization in the West and wanted a more simple life. I haven’t forgotten this story, especially because now, hundred years later, life didn’t improve much, thanks to the consumption and achievement society.

Also now people turn their backs to our busy world and are looking for more loneliness. You may even find deserted islands in Europe where you can play Robinson Crusoe. Those islands however are that close to the habited world, that most can rely on a shopping service, not dependent on nature anymore.

Mauro Morandi, 81 years old, lived for more than 30 years on Budelli, a little Italian island close to Sardinia, until recently, when he got evicted from the island.

Despina Achladioti, better known as Lady of Ro (1890 – 1982), lived alone on Ro, a tiny Greek island not far from the island Kastellórizo. Each day, during more than 40 years, she raised the Greek flag in face of Turkey, that lies just some kilometers away from Ro. It gained her a near mythological status.

Irini Katsotourchi and her husband settled in 2000 on the deserted island of Kinaros (not far from Leros), where she once lived as a child with her family. Her husband died in 2013, but Katherina will not leave her island.

Lesvos is that big that it will not have been an inhabited island for long. Archaeological founds close to Lisvori prove that already in the Old Stone Times people were roaming over what is now the island. Nowadays the island has about 90.000 inhabitants, half of them living in the capital Mytilini (I presume the thousands of refugees and NGO’s not included, even that most of them live already for years on Lesvos). In more flourishing times, like around the beginning of the twentieth century, the population on Lesvos was estimated being around 140.000. Since then wars and crisis raged, increasing the poverty, causing the emigration of lots of people especially to Australia, Venezuela and South Africa. The last years, since tourism has decreased dramatically because of the refugees and came nearly to an end due to corona, more people departed. The result is plenty of half empty villages only coming alive during summer, when their owners return for the holidays.

When I changed the city life for life on an island, especially in the beginning, just like Robinson, I tried to get as much as possible out of nature. I spent long days in the kitchen preserving fruits and vegetables, cracking nuts, cleaning chorta. Collecting mushrooms, looking for wild asparagus, picking blue berries, nature here offers that much, that as a parsimonious Dutchy I would take it all, even that I didn’t needed it. Nowadays the hours for preserving are considerably lower: the pantry was full of preservations that I liked to make but not to eat. I had tens of bottles of all kind of liquors, but never drunk it. I would be able to survive in the wild, but nettles or thistles are not that delicious to eat every day. So I slowed down. The only thing that never changed was the feeling of happiness because of all the space around you, where you could for days, weeks, even months being alone, whenever you wanted. Just like on a deserted island.

In the silence of these Covid times, the island has felt a bit like an uninhabited island. But I will never become a real Robinson. Friends and dinners are too precious for me. And to be honest, increasing age may be a contributing factor. I fell in love with the land that a friend bought years ago: terraces for crops, hundreds of different fruit trees, lots of magical oaks and huge rocks, going upwards the great kula (a stone hut) with even a better view than the house has. Now she is selling, but already the maintenance will be too much for me. This is clearly an estate for younger people, interested in ecological farming. A real challenge for folk who’d like to start a new life with a certain Robinson feeling: https://synthesis-realestate.gr/en/propertyDetails/11124427