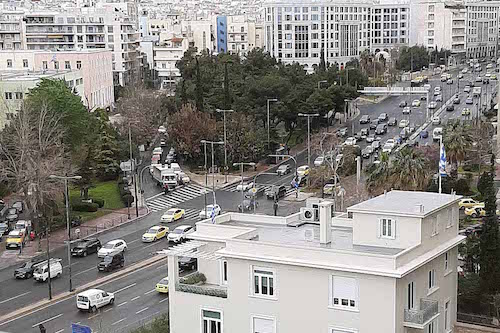 I couldn’t believe how lucky I was when they allowed me to quit the ICU. I moved to the 8th floor of the hospital, to room 810. After a week full of stress, where the only contact between us was through surgeons, J. finally could take me in his arms. Well, not entirely because I was too damaged. But we were united again — and I was allowed to drink: cool water flowing through my mouth. What a delight!

J. had a rough time. Not only was he unsure that I would survive; the hospital kept being closed for him due to corona and it was difficult to get news about me. When he was finally allowed to see me, at the gates he found extra heavy controls with covid tests and then checks that you indeed had a dependent in the hospital. The hospital was more or less besieged by ill people and each day it was a renewed fight to get in.

That first night I had an appleround roommate, who kept on getting up, walked a bit around the room and then lay down. I was irritated that she was so restless, but later I learned the credo of the hospital: ‘get out of your bed and move’! Greek hospitals do it the Spartan way, it takes some time to learn the ropes. The hallways were the perfect setting for the slipper parades. As soon as a team of doctors appeared at your bedside, the message was: ‘get up and walk’, an order to join the walking class in the corridors. This wasn’t easy, especially in the beginning: nobody told you how to get up, so it was pure luck that I slowly slid out of the bed until my feet touched the ground. However, I left the hallway to the other walkers: too many people and rumors that corona even in the Hippokration was taking victims. I felt much safer in my room, where I walked from the bed to the door, as restless as my first roommate.

My favorite place became the chair at the window. From the bed I already had a super view over a part of the city; from the chair next to the window I had a perfect view over Vasilissis Sofia Avenue, one of the major traffic arteries of Athens, which day and night propels large volumes of vehicles. As soon as you opened the window, a thundering waterfall of sound entered the room, like a sea, whose mighty waves kept on assaulting the traffic lights, only calming down in the nights. I became fascinated by that roaring stream of cars, busses and hundreds of motorcycles that formed the front of each traffic wave. For hours I could observe this pandemonium. I even created a game: the street was 4 lanes in each direction (and as I like playing the slot machines where you must get the same images aligned) I had to get 8 yellow cabs on one row. Twice I won the jackpot!

I wondered if maybe I developed Stockholm syndrome: Athens kept me in her noisy grip and I fell in love with her rooftops and the white rose light that turned the city into (Dutch) Sugar Bread. When the sun shone his rays over the white houses, an enormous amount of diamonds lit up. Everything was shining and I became mesmerized by this Mediteranean city, the beating heart of Greece. The chaotic forest of all those different roof terraces kept on feeding that fantasy, as did the old houses or little churches, that had been encapsulated by all the cheeky new buildings that have been placed really everywhere. It helped me pass the time which consisted mainly of getting injections, blood transfusions, visitations from teams of controlling doctors and students, but also by being amazed by the magical light and whimsy of the capital of Greece, that even in times of corona was ruled by large streams of traffic.

I learned to get out of bed without trouble and to go to the toilet again. With time I could start eating. They forgot to tell me that after such a heavy operation your taste is destroyed. So my first sip of chicken soup brewed by the hospital tasted like cardboard. It was the last thing I ate coming from their kitchen (except for the yoghurt and the red Jell-O). I still have problems with my appetite, eating and taste: bread still taste like sawdust.

On the eighth floor the staff was more quiet than on the ICU. During the long nights it was so quiet that you easily could think that everybody had gone home, leaving you all alone in the hospital. In daytime they entered your room with a smile and sweet words while taking more blood, adjusting the oxygen mask, giving injections, refilling infusions and so on. Occasionally there was even time for a small conversation, once my mouth was cleaned of that awful sticky stuff. I never had the impression that the staff was too tired because of too much work. That was only to be observed when going for an echo or scan in the lower caverns of the hospital and when we had to wrestle through the hectic hospital life. More than once there was a long wait for somebody to push my wheelchair. And then there was the battle at the elevators. In the morning it was near impossible to get a place inside without a wait, being in a wheelchair made no difference. I had the advantage that mostly I was accompanied by Claire, a sturdy Romy Schneider look-alike who announced herself by calling to me from afar: ‘June, June!’, giving me time to prepare for an umpteenth maddening ride through the hospital. Claire was always in a hurry and sometimes disappeared (I bet for another little job) leaving me stranded, once for 1 hour, in the underbelly of the Hippokration, a place you really do not want to be: dangerous faded glory, full of waiting people and the phantom of corona that lurked there for sure. But Claire knew how to claim an elevator in no time, once we were in, filling up the space with other waiting people, some of them anxiously staring at the sign for how many people were allowed into the elevator. We always arrived safe and sound in the cellars, where she drove me at high speeds through the corridors to my destination. The last time that she raced me closely along the shoes of the waiting people, I nearly burst out singing: Out of the way, out of the way! (a Dutch song: Opzij, opzij, opzij). I had fun, Claire, thank you!

Another star in the firmament was Dr. Sigala, one of the surgeons. She was a young looking woman with an impressing list of credentials, who at each checkcalled out: ‘Perfect, perfect!’. From the beginning she kept J. informed of my condition. She loved Lesvos, was dreaming of coming along with me when I flew back, but never made it. Her chatter was unstoppable about what procedures had been done, what still had to happen and about her work in Germany and the Netherlands. When she left in her white flying doctor’s coat, your ears were left abuzz, hoping that you had distilled all the important information from that large flow of words. She is a great woman that kept me encouraged not to loose faith that in maybe over a month I could swim again in the Aegean.

Life in a Greek hospital is Spartan, especially when you are not prepared for it. It is obvious that there is a huge lack of money — hygiene paying the price. But the staff knows how to work, the doctors and surgeons are excellent (at least in the Hippokration). There was a shortage of beds on the ICU, but they gave me a chance, even though I came from Mytilini. I was lucky that it was just for a few nights that I had to share the room with another patient. I saw some overcrowded rooms; I would have never survived. And I had this super view over part of Athens. During the last week I stayed in a hotel to have my last check ups in other medical institutions. I then drove through the streets, far down from the shining roof terraces. I saw a lot of green spaces and streets ornamented with orange trees, still bearing fruit. Even though the city was ruled by Corona, it seemed to me a friendly and vibrating city, although I was so happy when I left it to return to my beloved island, where quietness and nature rule. My adventures in Athens were over, but I will always think warmly of this city, with its thundering streets and intricate roof terraces, that saved my life.

My huge thanks to Dr. Georgios Kouskos (Mytilini hospital), the surgical team Prof. Dr. Konstantinos Filis, Prof. Dr. Frangiska Sigala and anesthetist Dr. Artemis Papadima, the medical staff of the 6th and 8thfloor of the Hippokration (including Stella-I-will-not-forget-you and of course racing nurse Claire), the flight and ambulance crew, Jan van Lent, Michaelis Parmakelli and all my dear friends that helped so much.