The Empire of Stones goes China 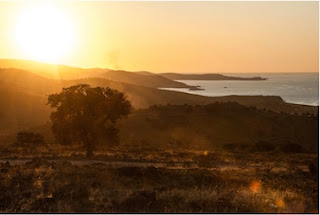 The latest Chinese National Geographic published a big article about the Petrified Forest of Lesvos. Woaw, are we going to have a Chinese run on Lesvos now?! I’m sure that the Chinese will also love the rest of the island. Even though Lesvos doesn’t have dangerous walking paths, like those on the Chinese mountain of Huashan, it does have kilometers of old footpaths through the mountains, with views as stunning as in China. The small donkey paths meandering through the olive groves, the pine and chestnut forests are also a challenge for hikers.

When you walk from the chestnut wood above Agiasos to the Cristal mountain in the direction of Karionas, you might just get such a Huashan feeling, because it leads over a narrow mountain ridge with steep slopes on both sides: one side looking over a Chinese like panorama with capricious silhouettes of mountain ridges descending to the sparkling sea and in the background the floating landmass of Chios. At the other side the view is over the Bay of Gera, nibbling at the mountains where Mytilini tries to hide and beyond the mountains is the light blue sea, with Turkey beyond. It is a dream spot for photographers.

However, the petrified trees of Lesvos are not alone in getting notice in the Chinese papers. In August the beauty of the island was spotted in Bejing during an exhibition of the Lesvorian photographer Tzeli Hadjidimitriou, the first Greek woman to have a solo exhibition in China.

Many tourists may know Tzeli because of her books about cafenions (39 coffee houses & a barber’s shop) and the hot springs of the island (Το άγιο νερό, The sacred water). Those beautiful Greek traditional cafes, where bright neon lights shine over treasures of faded glory, will eventually die out, because young Greeks do not want to spend time in the interiors of their grandparents. The same is true for the hot springs. Tzeli’s photos catch particularly well the lightfall in these springs, all carefully calculated long ago by Ottoman architects.

My favourite book of Tzeli is the one about stones: In communion with stone, a symphony of old stone houses, walls and enormous boulders which are so characteristic for the Lesvorian landscape. Volcanoes long ago distributed them profusely all over the place and the inhabitants were very happy with this wealth: everywhere on the island, you will spot a stone wall, used as a barrier or a support for an olive tree. There are places so crowded with old walls that you are bewildered and wonder how anyone found the time to build them. Coming across ‘kula’s’, old sheds or little houses, on mountain slopes is not unusual, and you wonder how the old inhabitants managed to live there. And of course, even in the most remote and impossible spots, like on top of mountains or hidden in caves with difficult access, you will find churches built with old stones. Some regions, like near Kalochori, are studded with Stonehenge-like boulders, making you glad that you were not there when the volcanoes spewed them out. In the area of Plati, above Michou, you will find plenty of tower-like heaps of stones scattered over the olive groves, as if generations of farmers had too much free time and built them. When you watch out over this Empire of Stones, you also ask yourself why most tourists only come for the summer sun. Lesvos is so much more than beaches, sea, Molyvos and Petra.

Tzeli’s work is as varied as is Lesvos. Besides her travel guides like a Greek guide of car tours on Lesvos (Ανεχερεύνητη Λέσβος) and A girl’s guide to Lesbos, her photographs catch the amazing fall of light on the apparently never-changing landscapes. These are the colourful works that were on exhibition in Istanbul in summer 2015 and this year travelled to faraway China. In Bejing a new piquant detail was added: from her series of naked women in the sea, some images were printed on very thin and large silk clothes, hung in the space in front of sunsets, olive trees, flamingo’s and mountains, bringing alive these ‘floating Sappho’s’.

Before the refugee deluge of last year, Lesvos (the third biggest island of Greece) was still fairly unknown and had small tourism. Now everybody knows of the island with the nickname ‘refugee island’. However, the wealth of natural treasures, the magnificent varied landscapes and the still traditional lifestyle remain one of the best kept secrets of the Aegean. Let’s see if the Chinese – who received a taste of Lesvos in Bejing and who can read now about what nature has created on Lesvos– will appreciate the island as it is.