Lesvos under the moon and stars 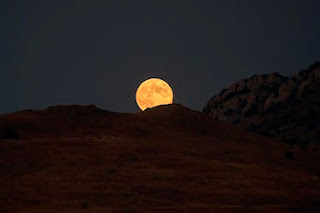 The media has been full of news of the biggest super moon in ages. I get a little confused about all the phenomena in the sky. For example, you have a blue moon when there are two full moons in one calendar month. Or a red moon, although I have forgotten when this occurs. And there are different lunar eclipses. And sun eclipses, and star showers. It’s one big paradise of events in the heavens.

As Lesvos is having so many days with sun shine, it offers a perfect possibility to see all those natural events. No teasing clouds stopping the show. Except on the day (November 14) that that huge moon was expected. I was quite busy that day, so it suited me that a thick layer of cotton-like moisture was filling the sky: even a super deluxe moon could not shine through it. I also had no idea what time that moon would appear above the mountains. I didn’t lay down on a comfortable stretcher, like I do when the stars shoot through the sky. But I was wrong: friends watching from the castle of Molyvos did see this bright orange ball appearing and when I finally decided to take a look, all I saw was a blue shiny light from behind the clouds. It wasn’t sensationally big. And there was a negative effect: the night the moon was supposed to rise like an opera star in the sky, temperatures quickly dropped. So it’s really so long to a beautiful summer. We have to wait for another weather event: the Alcionides Days in January, which will bring back some summer warmth.

So the moon tricked me. Just like the time when I decided to organize a romantic dinner in her dreamlike blue full beams. It was in the middle of the summer and there was no cloud to be seen. The table was set in the middle of a field and my guests took their seats, giggling because of the strange light. But soon enough you couldn’t even find a saltshaker and the diners were slowly disappearing in darkness. The Moonlight was fading fast, and a nasty black shadow drove across the moon: a lunar eclipse!

The sun also knows how to fool you. Once on a bright sunny day I was driving through the mountains, towards Tsonia. The view through my sun glasses got more and more obscured. So time for a thorough cleaning session, and then another one, but it didn’t help: even without glasses the view disappeared slowly. I panicked a bit, thinking that I would be blind any minute! The sky in the east took on an ominous darkness, the mountains disappeared in dark purple shadows and I saw less and less. Then a friend phoned me and asked: “Are you outside? Are you seeing it?”. I stared at my phone in disbelief and, totally upset, screamed back: “I’m practically blind”. “Great”, my friend answered, “enjoy the eclipse of the sun!” It did not become totally dark that afternoon, but all the birds, normally so loud on the island, kept their beaks shut. And I parked along the road, waiting for the comforting sunshine to come back.

Years ago whole tribes panicked when the sun or the moon performed these tricks, and many prediction for the end of the world coincided with days when darkness fell too early. But sometimes those eclipses did some good. In the time of Sappho, the Lydian empire stretched as far as the coasts opposite Lesvos (nowadays Turkey). In her poems she praised the Lydian soldiers, stout fighters who for years had been at war with the Medes. On a sunny day (on May 28, 585 BC) when the two armies faced each other, what happened to me happened to them: the light dimmed slowly and the battle field disappeared slowly into darkness. Although there was a scientist (Thales) who predicted the eclipse, the darkness was thought to be a punishment of the gods: terrified, swords and maces were thrown down and soon peace was signed.

So ignorance can also be good. Imagine if all fighting parties in the Middle East were to drop their rifles and UZI’s because Allah makes the sun disappear. I then would immediately become a muslim to thank Allah for this humane gesture.

Now half a moon, upside down, laughs in the sky, but on December 14 she will again take on the guise of a super moon, although a bit smaller than the one of November. This show however might spoil the fun of star gazers, who will also be ready on December 13 & 14 for the super star show of the Geminids, the biggest of the year, with 120 meteors a minute shooting through the sky.

But next year the events in heaven will be poor, with only one extraordinary show: a partial lunar eclipse on February 11. I hope I will not forget that date, so that I won’t take fright and drop all my ladles and pans, but instead will think of times when a sun or lunar eclipse could bring peace on earth.