The barometer on wild 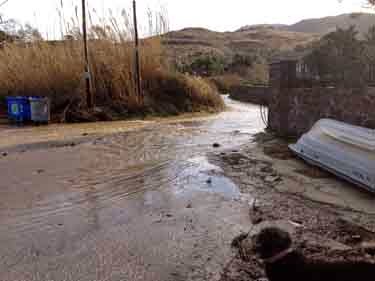 There is a new wind blowing through Greece that gives most of the population hope. The dust that it has provoked and now blows over Europe is like the Saharan sand, that came with the heavy southern storm that scourged most of the country a week later. Athens was filled with a red dusty haze, as was Lesvos; the sun became hidden by a layer of fine desert sand and dust.

About the new government and its leader ‘sexy Alexi’, as we like to call the new premier of Greece: there is plenty of information so I don’t need to write about that, except to say that the Greeks suddenly dare to believe in life again, even though the weather is bad, with grey clouds and lots of rain. Summer seems as far away as Europe being able to deal with Greece’s new demands.

By December we’d already had freezing cold and snow. A month later we were presented with warm weather, although that was seasoned with lots of rain. More recently we were confronted with a southern storm from the Sahara, which killed many a tree, window, etc. As a dessert to end the storm the wind changed to a westerly, what made the damage even higher.

It is not often that Lesvos has to endure such heavy weather. Do you want to know how your holiday island looks in winter? In Skala Kalloni the Gulf looked like a furious ocean, and also Skala Eresou was not safe from the raging waves. In Mytilini on Monday schools kept closed because of the troubling weather, the desert dust crept everywhere and the waves keep overtaking the quays. Close to Plomari a tree fell on some electricity cables, causing a blackout of at least 12 hours for the majority of the little city. Here in the north we had some kind of ‘flasher electricity’: it seemed to be going on and off and just as you prepared for total darkness, suddenly it powered-up again. I presume that this was hard-going for all our electrical equipment. No wonder these devices do not have a long life here in Greece.

In Eftalou there was only a single tree on the beach thinking it was nice weather to go for a swim; although in the hills (like all over the island) some farms suffered damage. Only in the last night the fuming sea hurled over half the beach onto the street and the river that has rippled over the street towards the sea, since the rainy days began, has now transformed into a real roaring river, which I don’t dare to cross, even wearing jackboots.

But while the dust storm raged over the country, an article appeared on the internet mentioning 15 of the most beautiful streets in the world shaded by flowers (Bored Panda): number one on the list was the agora of Molyvos with its Japanese wisteria, which changes the street into a purple tunnel when flowering in the spring.

Some years ago there was a little panic when this enormous climber fell ill, but the people of the village took such great care that she became healthy again. Now even though she looked a little pale with her wet branches in the last storm, I am sure that in a few months she will again show her scented flower-power.

Years ago the ‘boulevard’ of Eftalou was badly damaged by a western storm and it has never been repaired. I don’t mind, because unless they want to drive into the sea, the speed devils can no longer use the road as a racetrack. But this just shows how deep the crisis is in the country and I am wondering how fast the new government can change this.

It is a fact that this first month of the New Year, a storm has raged over the country: first a political landslide followed by a real storm that covered the country under a layer of Africa. There is much damage, some which cannot be repaired, like the historic arched bridge of Plaka in Epirus, that fell apart due to the heavy rainfall and its pieces disappeared into the fast flowing river. But thanks to the political storm most Greeks will sigh a bit and then set to work to clean their windows of the Saharan dust and the crisis. Even a nasty sand storm cannot cover the joy for this historical month of January 2015. When the Japanese wisteria comes to bloom in the agora, there will be no talking of complaints anymore but joyfull conversations and plans for a new Greece.