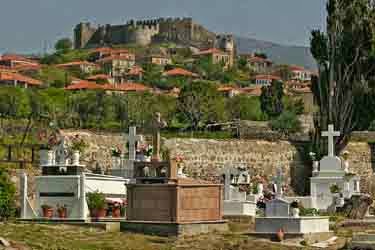 Last year the biggest grave ever in Greece got opened in Amphipolis, an ancient town close to Serres in the north of Greece. The grave was guarded by a large statue of a lion and two sphinxes and it has different rooms, most of them sealed off. A team of archaeologists are now slowly opening these rooms, which were closed for centuries. It’s a bit like discovering the grave of Tutankhamun. The big question is: who is buried in the grave? Some people hope that it will be Alexander the Great, even though he died long ago (in 323 BC) and far away in Babylonia. Other people think it might be his wife Roxanne buried there.

Last summer the media were full of speculation and news items of Amphipolis. But now that the world has other worries and Greece is under the spell of the latest election, news about the excavation of the grave has lost its place on the front pages. Even though recently 5 skeletons were discovered; that should have excited the world – but did not. Who was the woman over 60, the 35 and 45 years old men, the child and the other man?

They must have been important people, because the beautiful grave with mosaic floors, statues and different rooms, was far too large for a normal grave of those times. In the very ancient times Greeks could bury their dead as they pleased: they went through the towns in big processions trying to gather as big a crowd as possible, hired people to lament loudly and the graves were built as big as money could afford.

But in the 6th century BC the Athenian statesman Solon made laws to reduce the noise of funerals so that public life was no longer disturbed and graves could not surpass a building that could be built within 3 days by ten workers (which seems to me to still be quite a building, but I guess that Amphipolis would have needed more than 3 days of building). Since then graves became more simple, with standing gravestones or pillars (stele) pictured with the deceased.

Around that same time the tradition of funerals arose that was also adopted by the Romans: preparing the body at home (prothesis), the procession to the grave yard (ekphora), the burial and then there was a small party at home (perideipnom) to thank all the people that participated at the funeral.
Nowadays this has not changed that much: the deceased is made ready for the bier, the open coffin is taken to the graveyard in a small procession, the burial takes place and is followed by a small gathering home or in a kafenion for family and friends.

Ancient Greeks sometimes buried their dead with their slaves, women and/or horses; pets also have been found in some graves. Later it became only objects the dead might need for their travel to Hades, the underworld. Besides food, a coin (obol) was placed in the mouth, to pay the ferryman Charon who has to take the dead over the river Styx to Hades. Nowadays it’s only flowers that are thrown in the coffin.

Once buried at the graveyard, you are not allowed to stay for too long. To save space the Greek State says that a buried person has to be removed from the grave after 3 years. The bones are washed with wine and given to the family or placed in a local ossuary. Which sometimes can be an honour; there are some famous ossuaries in the world where they make pure art out of the bones. In the Czech town of Sedlec there is an ossuary where you find beautiful lamps, candlesticks and other decorations all made of bones. In the little Portuguese towns of Alcantarilha, Evora en Pechão the local churches have chapels built with walls of bones. Should the dead person no longer have any family, or is just simply forgotten, the bones are thrown on a big heap or simply destroyed.

There is a superstition that when a corpse is dug up, the bones must be white and clean. When not, it is believed that the person had a life in sin. Or even worse: it could be a vampire! There are graves found in Mytilini in Lesvos that became famous as those of vampires. People were so afraid that vampires would resurrect that they drove huge pins through bodies in the coffin.

You would think that in Greece cremation would be encouraged due to shortage of burial space. In ancient Greece cremation was as normal as was burial in the earth. There even was a time that it was an honour for soldiers to be cremated and many heroes of the Trojan war were this way rendered to ashes. It was in fact the Greeks who introduced cremation into Europe, but since the Orthodox Church rules over Greece cremation is highly forbidden. If you wanted to be cremated, you lost your membership of the church. In 2006 however the government decided that cremation was no longer illegal. But, to date, there is no crematorium in Greece and people who want to return to ashes have to travel to other countries like neighbouring Bulgaria.

On January 18th, Giorgos Giannakos died of pneumonia and he is going to be greatly missed in Molyvos. This dear friend loved to go into nature to gather horta or mushrooms. He knew every fish in the Aegean and even in Africa, he was a soulmate of the sea. It did not came as a surprise that he opted to be cremated and so his last journey will be to Bulgaria. When his ashes are returned to Molyvos, they will be scattered over the largest grave of the world: the sea. Goodbye, Giorgos!