The advantage of a house full of pharaohs 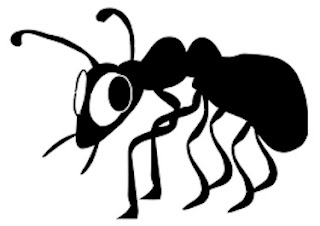 I confess: I am a mass murderer. Each day I kill thousands of little creatures, just because they get in my way. It’s their own fault, because they have attacked my house and now they are swarming all over the place: in the bathroom, the bedroom and (their favourite) – in the kitchen.

They are mini ants and when I checked them out on the internet, I found horror-like images. Look at these little monsters on a site about ants in Greece: Antweb Greece! I wonder how you could tell what kind of ant you are dealing with. Who can look such a minuscule ant right in the eyes? I see those little dots marching through my house. You can’t possibly miss them when they creep around in military convoy. These misfits are so small that I need to have my glasses on to see them, but even then: with or without glasses, head or tail cannot be discerned, let alone a frightening face with antenna.

Of the 290 species calling Greece home, the small ones are the minority. It can be a Pharaoh ant Monomorium pharaonis, a much too beautiful name for these bullies. They are also called Sugar ants, a logical name because they love sweets. There also are the Monomarium minimum, called simply Little black ants. But I much prefer the name pharaoh. Whatever they actually are, I will call them after those legendary Egyptian rulers, one of whom – Akhenaten (1351–1334 BC) did look so much like an ant that he could have been an ant pharaoh and gave his name to these creatures as ‘big’ as 2 to 3 mm.

So I have a house full of pharaohs. The whole day – heat wave or not – they are hyper active, towing invisible things, hunting delicacies and even sending scouts to my laptop, hoping to find a hidden cake there. Where do they get all that energy?

Once long ago the Greek island of Aegina was raged by a mortal disease and most of the inhabitants died. The ruling king was devastated and asked Zeus for new people. This lazy god, who had just seen a train of ants climbing into his favourite tree, changed the ants into people: the Myrmidons. They became reknowned for their endless energy and discipline and made first class soldiers. Later it was Achilles who showed them off during the siege of Troy.

In Africa there still are scary ant armies. When I read The Poisonwood Bible by Barbara Kingsolver, I had nightmares about ants eating my house overnight. I am sure that the ant units mentioned in the book did not consist of warlike pharaohs (even though they too originated in Africa) but of a far more bloodthirsty species.

However, the African, warlike pharaohs of Lesvos party on the dishes waiting to be washed, break into hermetically-sealed pots of honey and jam, eat clean and dirty towels and convert each cupboard into a wriggling nightmare. I am sure that I’ve drunk several of them, drowned in the endless glasses of water that you are supposed to drink during the Greek heat. Those rascals are thirsty and not only rush for sweets, but also for water: so they have turned the bathtub and sink into permanent camp grounds, even though again and again I attempt to drown them with gigantic tsunamis of water.

Could housing those thirsty African warlike pharaohs actually have an advantage, I ask myself desperately, each day thinking more and more about giving up. According to Werner Herzog’s movie Where the Green Ants Dream, there once was an aboriginal people who believed that green ants created the world and even kept it alive (you’d better say: kept it clean). Also the American Hopi Indians have a legend telling how their people once were saved by ants.

So I have legendary, thirsty, African, warlike pharaohs in my house. They can be combatted only with lemon, vinegar, dish soap or some chemical shit. The problem is that I hate to clean; but those masses of ants have forced me to become an exemplary housewife. Every bite of food now has to be followed at least by ten minutes of cleaning. So the only positive point of the invasion of these forcing-me-to-clean, legendary thirsty, African warlike pharaohs is a free home-polish course! My house has never been so shiny and clean.