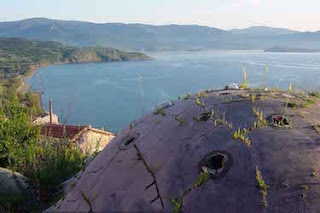 (The hamam of Molyvos before restoration)

It is incredible to know that the Greek tourist organization has existed for more than a century. Complaints about shabby hotel rooms, an absence of (local) cooperation or any plan for the future are as old as this state institution. The Greeks think that by publishing nice pictures alone, they can entice visitors to come and add money to their economy.

There always have been tourists in the country of the Olympic Gods. In the near ancient times people traveled from far away just to see the Seven Wonders of the Ancient World, to swing at music events, for discussions at theatre festivals or to gain a much wanted laurel wreath at the Olympic Games. The Games were so important that during the period that when the athletes were challenging each other, all wars were stopped in order that participants as well as spectators could have a safe journey across all regions. What a pleasure it would be to find only good news in the papers during the Brazilian Games!

Lesvos, only touched by the traveling Olympic Torch in 2004, has had its tourism somewhat delayed. In ancient times some spa guests will have showed up, but the island had no World Wonder nor important national festivals. Although Lesvos’ nature already was celebrated then: it was here that Theophrastus invented botanical science and Aristoteles travelled especially to Lesvos to study its plants and zoological world (see: the documentary Aristoteles’ Lagoon. Later the Romans celebrated Lesvos as the green pleasure ground of the Aegean. There then followed a long gap in the history of Lesvos’ tourist history, only filled up by some travellers’ diaries.<

The Greek Tourist Bond does not seem to have shared the opinion of the ancient Romans. In any case, by the beginning of the 20th century most tourists only wanted to see archeological treasures, and those had long ago fallen apart on Lesvos, except for some castles here and there. Then, in the Sixties, when the first tourists wanted to keep the island a secret because they thought they had found a lost paradise, the first tourist building was opened: Hotel Delfinia in Molyvos (1961). Since then the number of visitors has been on the rise.

This year, however, the numbers have fallen dramatically because tourists are afraid of refugees, who only hang around the camps near Mytilini these days. Already plagued by the crisis, the middle class is desperate and echoes one after the other their cries of distress in the media. But the island remains incredible quiet. Time for some meditation, necessary for Greek tourism, but also for Lesvos.

The excursions of the big tourist operators keep on going over the same paths, some hotels have their guests sleeping in the same beds for decades and no director has any idea which touristic values are a trend. Yes, I do admit: in recent years there was no money to renovate. The crisis hovers around like a big moustachio’d maffia boss. But when a new cafe or supermarket is a success, the following year plenty of copycats will open their businesses, so there still is some money going around.

Last week the old bath house of Molyvos was reopened after years of renovation. For many people sweet memories of cleaning parties and lots of water fun will have surfaced. The hamam for a long time was the only place to bathe in the village. The luxury of bathing at home only became available at the time that the pool of Hotel Delfinia was threatened with becoming the second bath house of Molyvos.

The bathrooms have been restored to their rich old marble glory, transparent glass covers the floors and lightholes in the typical Turkish cupolas, changing rooms have been painted bright white and the taps gleam like gold. However there is no water streaming anymore, nor are the spaces filled with that mysterious steam that turns bath houses into those pleasing and exciting places: the hamam of Molyvos has been turned into a museum. The bath house has been transformed into a jewel. But instead of shaking off the dust and taking a break from the hot sun and passing time gossiping with friends in a refreshing cloud of steam, you now can only watch, salivating over pictures of people enjoying their baths, and long for the quietness of the water or some beneficent massage. Which smart ass turned the water off?

The local information office has been retrenched to Mytilini; more than one little museum sighs with doors and windows closed under a layer of dust. The Teriade Museum that possesses, apart from paintings by Lesvos’ most reknowned painter, Theophilos, works from international artists like Chagall, Matisse and Picasso, has now for years promised in vain to re-open its doors. Time and weather has been given the opportunity to damage its art works. I bet that in three years’ time the Hamam of Molyvos will look the same as it has in past decades: another one of the many buildings in the village now doomed to be closed and to fall to pieces – like the customs office in the harbor of Petra, where not even a refugee boat has ever moored.

This is typical for the tourist politics on the island: self-interested people with big mouths run the world, making us miss the opportunity to enjoy how it really feels in a Turkish hamam. Therefore you have to go to Mesagros, where old bathing buildings from 1898 not only are rebuilt, but also where you can enjoy relaxing in warm water, surrounded by clouds of steam and nice scented soap.

The choice for bath houses lessens by the year on this hot spring-rich island. The hot springs of Eftalou were for years, summer and winter, a popular place to gather and bathe, it has now become more and more a no go area because of a bad service and the growing number of days when it is closed. The baths of Lisvori for years now have been abandoned after a catastrophic attempt at restoration. No Councillor lies awake because of this.

In the hundred years that the Greek tourist organization has existed, there has been no minister who has tied local tourism to a workable national plan for the future – leaving the tourism to some local potentates. It seems that we have to wait until that awful sultan from the other side comes over to make the baths ready again for a bigger public.