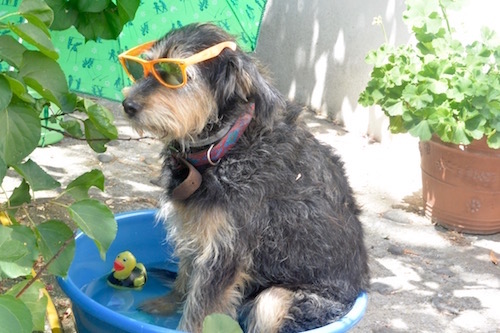 I do like a bit of heat. In a Greek summer you’d best be heat resistant. That is easy, as long as you’re in sight of the sea and the heat does not climb into the red numbers, as happened last week. That was an exceptionally hot and especially long heatwave. It was difficult enough here on the island, but life in cities became nearly impossible because there temperatures easily accelerated d far over 40oC.

I live in a house without aircon but with sea view. The Aegean often blows a breath of air to the house, which I receive with all windows open. Even in cars I can do without ‘air’, where my short hair jumps in the wild wind that pops in through the open windows. But when I had to go to Mytilini last week for a first vaccination, my nerves needed to be tempered by the aircon that spewed such cold air that I had to cover my forehead with my mask in order to avert a sinus infection. I just can’t imagine how 40oC felt in Kalloni.

The first airconditioners were introduced around 1900. But even before then people knew how to keep the interiors of buildings cooler than the outside. Lots of people used to live in caves, or underground houses, never bothered by uncomfortable heats. Go and see for yourself in the many underground cities and cave houses in Cappadocia (Turkey).

Pharaohs had their palaces above ground. To keep them cool, windows were covered by wet wicker mats to be kissed by the wind. If you hang a bottle wrapped into a wet towel outside the window of a driving car, you get the same effect: an ice-cold drink. As I didn’t have a wicker mat, I hung a big cloth across my doorway where it could meet the wind. The effect was great. The only thing was that I had to wet the cloth again within ten minutes — a big chore during a heat wave, when you are supposed to do nothing.

It may be that cloths dry more quickly than wicker mats. Last year when a wildfire threatened to embrace the house, I wet the back of the house (a shed that had wicker walls) with a garden hose while the first flames popped up at the neighbour’s. The fire thankfully did not get a grip on the shed, nor on the house — but the real rescue of the house was thanks to the fire brigade.

In the Middle East (Iran) they didn’t need water for their cooling systems. There you find the roofs adorned with lovely towers with wide openings that caught the wind and thus created air streams: wind catchers. Traditional water reservoirs also used wind catchers to keep, even during a scorching summer, the water at near freezing temperatures. In Greece there are only chimneys on the roofs. When those catch a breeze of air, you risk a sooty black living room. Although I do wonder if you could turn a chimney into a wind catcher; it is an air canal and with canals you can create cool air.

Air moving around is the magic trick for cooling and started with silk and feather fans in China. At the beginning they were just decoration, later they realized that fans could be used to cool down. In India they used Punkahs: large clothes that swayed in the air, thus moving around air. Although this lovely system with ropes and pulleys could only be supported by slave labour. Then the Punkahs were replaced with automatic ceiling fans.

In Greece houses were armed against the heat with thick walls, small windows and shutters, that in daytime were kept hermetically sealed against the hostile sun. Like in the medieval village of Molyvos, where also the narrow streets offer shadow and coolness.

I survived the heat wave without aircon. The house does not have fountains, thick walls nor a Punkah, so I kept windows and shutters closed, towed an electric fan everywhere I went in the dark house and used some Spanish fans as reinforcement. Now a bold breeze blows from the north and all windows are open as wind catchers. The shutters no longer have to keep the daylight out, the house has returned to being light and airy. As long as no fire raises my temperature or my heart rate, I will not complain; though I am very sad about the devastating fires raging elsewhere in the country.