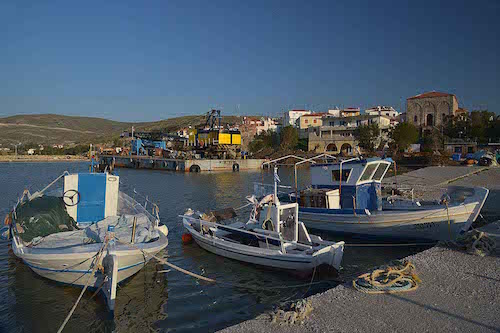 A quiet, small village, at the utmost western point of the island, surrounded by rugged impressive mountains, ‘at the end of the road’, as they say. This is lovely Sigri, a world on its own on Lesvos because it always is cool in the summer due to the wind that seldom lies down.

It is world famous, not for the village but for the Natural History Museum of the Lesvos Petrified Forest. The number of petrified trees found in its surroundings made the village known, but never brought masses of tourists, only busses full of day visitors.

Even without the museum this sleepy village should be known by all tourists. Not only for its nice white chalked houses – an exception on Lesvos – but also for its beautiful surroundings, rich with big lonely beaches at the foot of bare mountains. Nowhere on the island can you get a stronger feeling of history and nature being present.

The remains of very old towers show that in ancient times this remote area had been more lively. In the hills excavations prove the existence of ancient settlements and looking at the walls of some houses, you might spot ancient stones, once belonging to glorious buildings. Now there only remains the Turkish castle, built in 1776 by Sultan Mehmet as a defense against pirates and other enemies. When Lesvos still was part of the Ottoman Empire, only Turkish people lived here. Might be a reason why this little village has never been very popular with the Greeks.

On both sides of the village long beaches litter the coast. Like Faneromeni, in the north, with a small tavern for thirsty throats but on its sands quietness reigns. At the south side of the village, along the dirty road to Eressos, more long beaches stretch at the feet of barren mountains. A whimsical coastline with many inlets make those ribbons of sand adventurous places, not easy to reach, but once you have found the way, you may have that whole paradise all to yourself.

Sigri: with its picturesque little roads under bowing reeds, between cool green fields and other fertile grounds, a gem stone hidden behind the fame of the petrified trees. But not for much longer.

The new road from Sigri to Kalloni is no longer frontpage news. Some parts are ready to drive on, or like the last part to Sigri, have already been in use for years. The bridge somewhere between Vatoussa and Andissa finally reached the other side, but for many people it is the question over which mountain tops will the tarmac continue its way. The solution might be drawn somewhere on a map – maybe not. Maybe the many sections of already completed road scattered in the landscape toward Kalloni will never be connected.

Last summer I had a big laugh, when I was told that they would build a new harbour in Sigri in eighteen months. I didn’t believe that it was possible in such a short time. They have already worked for years at the road and I am sure that the road will not be finished in that little time. When visiting Sigri last week I had to admit that I could be wrong concerning the harbour. The seaside of the charming village was upside down: the spacious place at the harbour, where ferries used to dock, was filled with cement mills and other machines and a playground with plenty of sandy hills. A bit further out at sea floated a huge platform with a crane whose arm danced from the wall to the sea, in order to place enormous cement blocks in the sea. If they continue at this pace the harbour will certainly be finished in time.

I thought they made the wide new road to build a monstrous wind farm on the tops of the Wild West, but there is suspicious silence around these plans. It is clear now that the harbour is built to take ferries. I took the map and saw that indeed each journey with a ferry, going over Lesvos (except the ferries to Turkey) might be shortened by two hours, if they stop in Sigri, instead of Mytilini. Kalloni, a place where traffic jams can appear, will have to pay with more circulation. Time for a bypass there, but the shopkeepers are too afraid to lose their clients, so it will make the bottlenecks even more disturbing.

Sigri will not become a Pireaus. It might offer a daily event, seeing the docking of a ferry at least as big as the entire village. But Sigri will no longer live under the wings of the Natural History Museum, nor will it any longer be the hidden gem for people who like quietness, although I think the beaches around will not easily be disturbed. It might be that Sigri will be transformed from a quiet fishermen’s village to a lively little port town.