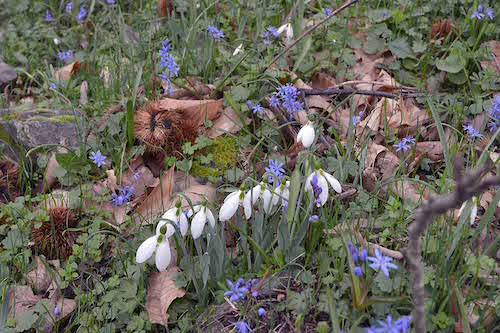 Those Russians, with pointing fingers flying far beyond their borders, seem to think that they are like the ancient Greek gods. The attack with nerve agent in England on a double spy and his daughter has sharpened international relations. I wonder why they left such a clear fingerprint. There are less complicated ways to poison somebody. Socrates for example, sentenced to death because he neglected the then ruling gods, choose as his cup of poison, an extract of hemlock, a plant easy to find here.

The Greek gods were no darlings either, especially if you offended them. They used nature to realize their nefarious plans and knew where to find everybody everywhere, just like Russia nowadays. You can fill an entire herbarium with people changed into herby plants or waving trees. Hyacinth once was a very pretty young boy, killed by a jealous god and revived as a beautiful scented flower by Apollo. That same Apollo once chased a nymph, who was changed by her father into a laurel tree in order to escape Apollo’s love making. Minth was a nymph in love with Hades, who got changed into that lovely herb by Persephone, Hades’ jealous wife.

The gods knew their botany. Circe, daughter of the sungod Helios, was even a specialist in herbs. As Goddess of magic she is considered to be the first witch mentioned in literature. She brewed mean drinks and changed, in combination with her wand, people in animals. According to Homers’ Odyssey she lived in a huge palace in the midst of woods, where plenty of tamed lions, tigers and other animals roamed. When Odysseus and his men sailed to her island, she welcomed them in a great way and organized a rich banquet in their honour. Odysseus, tired, remained with a small crew on his boat. The men who continued partying, however, changed into boars, except for one, who hadn’t trusted Circe and run back to Odysseus to warn him. When Odyssey set off to save his men, the god Hermes stopped him to tell that there was a herb that resisted the magic of Circe: moly it was called. So Odysseus chewed on some moly’s and without fear of Circe’s magic he persuaded her to change his men back into humans. When Circe promised not to harm him with her magic, this Trojan hero stayed for one year at Circe’s palace, to party and to love.

According to Homer, the plant moly, that originated from the blood of the giant Picolous, has a snow white flower and a black bottom. Curious as always, science tried to find out what herb Homer was writing about. Scientists do not believe in magic and think that Circe gave the men something that made them hallucinate, thereafter behaving like pigs. The galanthus has a substance (galamantina) that annihilates hallucinations, so it is said that moly is a snowdrop.

These little flowers have properties that matter. Theophrastus long ago mentioned their anti-poison faculty and nowadays those snow white flowers also are used in the battle against Alzheimer’s. Their playful clocks jingle in order to call the spring. However they are not the only ones calling out for this season: the island has just had its yearly transformation into a colourful flower park. In all kinds of colours, anemones giggle on grassy lands, tapestries of daisies stretch lazily under the olive trees, dandelions and other yellow flowers colour the grassy verges of the country roads, along the sea purple-pink gillyflowers open amongst spare grass and stones at the beach and orchids appear in special places.

Last week we went to the chestnut woods above Agiasos. I did not expect lots of flowers in the dark, moist wood, but we were immediately welcomed by masses of alpine squill, like the blue sky did descend on earth. So enchanting! It got even better. A little further on, we were greeted by meadows filled with thousands of snow drops. It looked magical! It was only the second time I have seen these little snow clocks on Lesvos.

I wonder if these delicate flowers (or any other plant) can be used as an antidote for nerve agents. Nature has an answer for mostly everything. The Greek gods knew that: they didn’t need complicated formulae or laboratories to punish people and did not leave chemical tracks. They just took what was needed from nature.