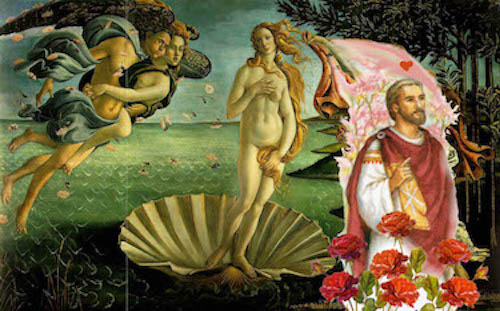 In winter time the inhabitants of Lesvos like to barricade themselves behind their front doors, watching television, seldom leaving their place. Since the crisis there is hardly even a dinner party in a restaurant that can succeed in getting them out. Even Christmas is spent indoors and on New Years Eve it’s just youngsters who gather in the empty streets.

The Greek hibernation only gets interrupted when Dionysus rattles the door to wake up the people for the Lent. After a boring winter, frustrations have built up, and it is time to get them ventilated: and for that purpose there are three weeks of Carnival (Apokries). The first week is the week of the annunciation. The second week is dedicated to meat, and is highlighted by Tsikno pempti, the Thursday when they have huge barbeques outside: the smell of grilled meat seems to really get people out of their houses. It is customary to eat as much meat as you can, so that you won’t long for meat in the coming 40 days of Lent.

At the end of the third week, the cheese week, the parties finally start. Colourful costumes are dug out from cabinets and bottles stand ready to grease the throat. Since the crisis hardly any procession with carnival floats is to be seen in the streets of the island. Most of the carnival is celebrated in public rooms where too loud music brings people to the floor.

The Olympic Gods didn’t have carnival, except for Dionysus, God of wine and dance, who annually at the beginning of spring, celebrated the rebirth of nature. On those days, not called carnival then, the followers disguised themselves as satyrs, others put masks in front of their face while running through the streets, yelling obscene things and going mad. There were also lots of satiric performances in the theatres. When the Church got all the Olympic Gods out of the air, they also wanted to get rid of all those pagan rituals. But nowadays the carnival has grown again into a celebration of Dionysical proportions. In the Greek village of Tyrvanis the whole carnival event is about huge phalluses, just like on Naxos, the birthplace of Dionysos, where secretly they celebrate his birth with symbols of phalluses.

In the Lesvorian mountain village Agiasos they also celebrate big. But here they have more theatre. In the weekend of carnival the streets rustle with people in disguise and little stages, from where they fulminate against all and everything. You could say that the carnival of Agiasos is one big standup comedy festival, where people say whatever bothers them, everything from fights with neighbours to the big conflicts in the world.

As a last spasm of festivity on Clean Monday (Kathari Devtera) the children are sent to the meadows to go kite flying. In nice weather the parents will follow with picnic baskets, but most will end up in the overflowing restaurants, where as meat is forbidden, there is traditionally a run on shellfish and vegetables.

Unexpectedly last week on February 14 another festivity sneaked into the carnival days: Valentines Day. Maybe more modest than a Dionysus party, but on the program was a contest to write the best erotic letter, song or poem. Not many people know that Lesvos is the island of the Holy Valentine. The catholic church on Ermou (main street of Mytilini) harbors an important relic of this now popular saint. “Surprise your friends with a present”, is the slogan of this commercial day. The Greeks have picked this up, although not yet as badly as in other countries where around February 14 you stumble upon hearts and other romantic rubbish.

The capital this year decided to celebrate big because the church restoration has just finished and the relic, that stayed in Athens for a while, is back home. Besides a concert and some poem readings, the holy remains of Valentine were brought into the fresh air in a real procession full of catholic priests – coming from Greece, Europe and including a special representative from the Pope. That must have been a show because it is not often that you see a procession with priests who are not orthodox, in other words: those having maybe a tiny beard but not buried in their overgrown beards.

The Tourist Union of Lesvos should publicize this pilgrim location. Besides Christmas and Carnival Valentines Day is the most commercial day of the winter in Europe and America. A romantic trip to Lesvos would be a great Valentine gift, especially when you can encounter part of his remains. To stumble by accident upon a carnival festivity with Dionysic features, can be a high light for a romantic holiday on the island. Let us have Valentine join in the carnival festivities and highlight that Lesvos is the island where Dionysos – hand in hand with Valentine – honours love, friendship and spring.