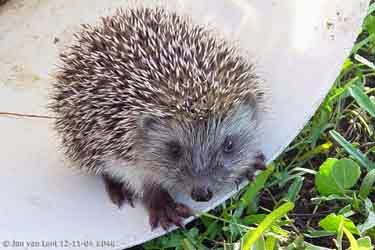 It may be due to the very late spring that hundreds of snails were wandering in my garden. Even now, after an unusual summer outburst of rain on the island, you can see them swarming slowly in all directions. When you pick something up from a dark corner in the garden, an entire family, trying to survive the dry spell, may be glued to it.

In one way or another the garden survived the plague and now it is time to enjoy the sight of another animal that, in far smaller numbers than snails, roams around the house: the hedgehog. These creatures are the opposite of a disaster for your garden: they eat worms, spiders, sometimes snakes and snails; unfortunately, only the small ones, not the big ones that I suspect can eat an entire rosebush in one day.

Probably not many people will associate Greece with hedgehogs. In Greek mythology its name barely appears. Although Aristotle did remark that this animal mated standing up. Pliny the Elder also unjustly noted a fact: hedgehogs were fruit thieves! According to this Roman philosopher they climbed apple trees and vines, shook the branches and then rolled with their spines in the fallen fruit in order to transport the fruit on their back to their winter domiciles.

Centuries later the reputation of the hedgehog was still not really good: they were suspected of being milk and egg thieves: it was believed that they drank milk straight from the udder of a cow and stole the eggs from the chickens. Even Shakespeare never appreciated how clever and helpful hedgehogs could be: he thought that these spiny creatures were messengers of bad news. Over the centuries in England hedgehogs were seen as harmful animals and there was a period when there was a bounty for each killed hedgehog.

The poor hedgehog has to lug around some eight thousand spines; the clever Romans saw commercial use in them and used them to teasel wool. They even used the skin to make clothing brushes.

Nowadays the reputation of a hedgehog has been cleared: it is a helpmate in the garden and you can even use him indoors to chase mice and cockroaches (that is, if you are a sound sleeper, because hedgehogs in the garden constantly grub about in the earth between swishing dead leaves, but inside are also pretty rowdy).

These shambling hedgehogs with their pointed snouts and little black eyes look so sweet and they have few natural enemies: most animals have no idea how to tackle those eight thousand spines. The biggest enemy of a hedgehog is a human being. Not that we know how to crack their spiny shield, but our cars and reapers in the fields know very well how. In earlier times hedgehogs were collected in order to cook them. The best known recipe for hedgehog is to put it in a ball of clay, roast the ball slowly on hot coals and when the ball is opened, the spines will remain stuck in the clay; the result being a delicate and tasty piece of meat.

(Warning: this part is not suited for sensitive animal lovers without any sense of humour!)

Additionally, in the United States, England and Australia animals that get killed on the road may get eaten. There even are so-called Roadkill restaurants where you may be served kangaroo, deer, possum, emu and all kinds of other wild animals. I guess nobody would dare to open such a Roadkill restaurant on Lesvos.

Hedgehog roasted in a clay ball seems to involve a pretty long wait, so that is not convenient to serve in a Roadkill restaurant. Hedgehog spaghetti carbonara could be. Also recipes with tortoise, frog, snake, squirrel, fox, dog and cat could be on the menu of a Roadkill restaurant on Lesvos. The island also has locusts – but I guess they are unlikely to be squished with a car – and smashed snails don’t seem appetizing to me because their gunk will be full of tar.

Yesterday the field in front of my house was mowed and in the evening it was remarkably quiet around the house: no grunting or rustling amongst the leaves on the ground. I didn’t go into the field to look for the humming hedgehog or the hedgehog with the white belly. I could never eat a torn apart nor an entire hedgehog, for that matter! I do hope that the hedgehogs simply got such a fright from the roaring mowing machine that it will just take some days before they reappear again and come to beg for the remains of the dinner for my spoiled cats.