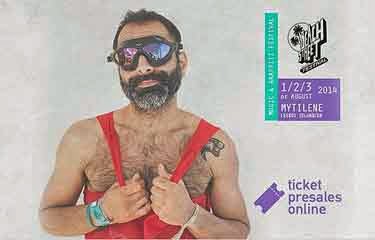 Was there a secret cult or was the place an army camp in ancient times? This is not known. What is fact is that this Aegean island, lying next to the Cycladic islands, but belonging to the Dodecanese group, was a fairly unknown island, that became news when they discovered mass graves with newborn babies.

Lesvos is known as the island of Sappho. Her many poems about women made lesbian women think that Sappho might have been the first lesbian. This is how the name lesbian came to the world. As far as I know there has been no ancient grafitti found on the island, depicting anything about lesbian love. The grafitti that has made news on the island is not ancient at all and has a more social and political meaning. Last year during the Beach Street Festival the big unfinished hotel at the end of the longest beach of Lesvos in Vatera finally became a destination because grafitti artists with their astonishing wall paintings turned the big concrete spaces into a kind of an open air museum. And all this to honour the famous painter of Lesvos: Theophilos Chatzimichaïl (1870-1934), who, in his time, decorated lots of walls with his art.

This Lesvorian early grafitti artist will be celebrated again at the Beach Street Festival which presents music and grafitti on August 1, 2 and 3. This time the festival will take place in Mytilini, just below the castle at the seaside. Some hundred artists will kind of pave a road towards Theophilos and to the man who introduced Theophilos to the international art world: Tériade.

Stratis Eleftheriades, better known as Tériade, was born in 1897 in Mytilini, went to Paris to study law but obviously fell in love with the arts. He became a known art critic, helped artists with their career and finally started to publish art books. He also brought the art of his fellow islander to attention of the French art world and this is why today we can find works of Theophilos in the Louvre.

In 1979 the Tériade museum in Lesvos was opened, just south of Mytilini in the village of Varia, alongside the museum of Theophilos which opened in 1965. In the Tériade museum it is mainly art books that are exhibited, with original works from, amongst others Picasso, Matisse, Miro and of course there are the famous drawings made by Marc Chagall for the Lesvorian fairy tale Daphnis and Chloe.

During the Beach Street Festival the route from the castle in Mytilini to the museums in Varia will be marked by lots of artists who will decorate empty walls and other buildings with their art. That promises to become a nice party! Also because there are workshops given in grafitti art: put your mark to the city!

Another reason to visit the festival in Mytilini are the 50 music acts which will be presented on different stages: the capital is going to swing! And for sure swinging lots of times after that: if the new grafitti will be as impressive as the ones in Vatera, we may enjoy the art long after the festival will be closed.

There is a lot of dancing going on also in the north of the island. Last week the fancy modern open air club oXy (pronounced not as the Greek ochi, but as oxi, of oxygene) opened its doors. The club is settled high on a mountain between Molyvos and Petra, on a kind of boat-like construction (previously the Gatoluzzi club). The enormous platform houses a pool, seats, restaurant and a VIP-lounge where after midnight you’ll be sure to find a swinging crowd. For people who prefer more calm nights, in daytime it is a chic and relaxed lounge club with a superb view over the Aegean and with a pool to cool off.

The oXy club has revived an old dance club. The Beach Street Festival also gives empty buildings a new function. Some old olive presses already have been transformed into hotels (Olive Press in Molyvos, Hotel Zaira in Skala Loutron) and museums (olive museums in Aya Paraskevi and in Papados), but still many of them, spread all over the island, remain vacant, just like other interesting buildings like the Arion Hotel in Molyvos, the old spa hotel Sarlitza in Thermi, the old night club in Skala Sykaminia, a school with a magnificent view in Ypsilometopo and plenty of old factories in Plomari and Perama. I do hope that there will come more creative people who think out new functions for these monumental buildings, so that Lesvos’ Old Glory can become the face of a new sparkling and swinging island that has everything for the modern tourist.