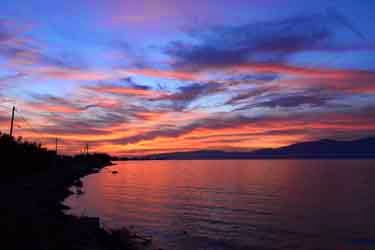 (Sunset in the Bay of Kalloni)

I love the winter light here on the island. The Bay of Kalloni in particular has lots of light changes and I think it is the best place to take photographs. The sea views elsewhere on the island can be equally attractive, like at Vatera when angry foam caps roll out of a green sea to attack the beach, their bright white colour detonating against a dark sky far behind it. And what about when bright sunrays shine through massive packs of clouds, illuminating the Lesvorian Mount Olympus or shower faraway rocks on the west coast with a mysterious light. Clouds are just like magic lanterns playing with the light.

The island has finally had some serious rain and during one of those rainy days – there were a few hours without rain – the clouds were so low in the mountains that there was no way to avoid them and you just drove into them. Fog on a busy highway is no fun, but here on the island the roads are quiet so you have a chance to enjoy a foggy mountain landscape: a fairytale landscape was created where trees seemed to float and the pink flowering almond trees became part of the clouds.

During cloudless summers lots of tourists gather at strategic places to see the sun disappear into the sea. Those people should come in the winter: that is the time when you are regularly confronted with dramatic sunsets, when bright orange lights climb towards heaven and clouds colour red, painting the island with magic lights. Even a colourful rainbow cannot compete with that.

Clouds can take astonishing forms. Zeus also knew that. He created the cloud-nymph Nephele, in the form of his wife Hera, who had complained to him about the unwanted sexual advances of King Ixion. When Zeus sent the Hera ‘look-alike’ cloud Nephele into the sky King Ixion raped the cloud and the myths say that is how centaurs (creatures that were half human – half horse) were born.

There is another myth about this cloud-nymph Nephele. It tells the story of how, when she saw a beautiful palace, she climbed off her cloud, thus meeting King Athamas. They fell in love, married and had two children: Phrixus and Helle. Eventually Nephele became very homesick for her life in the clouds and she left her king and children. King Amathas then married Ino, a princess banned from Thebes.

As soon as Ino had her own children with Amanthas she began to hate Phrixus and Helle. When Amathas announced that Phrixus would be the next king, Ino created a famine and bribed the oracle of Delphi to say that the king had to sacrifice Phrixus in order to end the famine.

On the day of the execution Nephele came on her cloud to save her children. She put them on a golden goat that would fly them to the kingdom of Colchis where they would be received as royalty. During bad weather however Helle fell off the goat into the sea, which even today is called the Hellespont (the link between the sea of Marmara and the Aegean sea, also called the Dardanelles). Phrixus reached Colchis; he offered the goat to Zeus and gave the golden skin to the king, which brought him lots of wealth and power. This was the famous Golden Fleece that later on would be collected by Jason and his Argonauts.

Apollo was one of the many Olympian Gods and had different tasks (and names). The Oracle of Delphi pronounced his prophesies, he was patron of music, poetry and healing, but at the same time he could distribute pestilence all over the world. He was also the god of light and the sun. And of course he had followers on Lesvos. A myth relates that when the head of Orpheus drifted on the shore of Lesvos at Andissa, the head was taken to a temple of Apollo where it became a popular oracle. I do not know if this temple was close to Andissa; as far as I know there were two temples dedicated to Apollo known on Lesvos: one in Klopedi (the remains can still be visited) and one on Lepetimnos (but this temple is only known from ancient documents).

It was a good location up on this mountain for a temple to Apollo: from its top you have a splendid view across the north of the island, you can look deep into Turkey and very far out to sea (on clear days you can even sea Mount Athos on the mainland) and from the top you have every possibility of experiencing magnificent sunsets. On this highest spot on Lesvos (Olympus is just one metre shorter) I can imagine that Apollo even today is still creating beautiful light-shows while playing with the clouds. He has the shadows of the clouds meandering over the mountain slopes, he has them cosily curling over his mountaintop, has them dancing around other mountains, gives them steam to create huge cauliflower shapes, chases them like volatile nymphs through the heavens, paints them in an ink-black colour in order to announce rain, gives them red, yellow and orange explosive colours in order to say goodbye to the sun or just turns them bright white and sends them off to shuffle like sheep through the sky in small formations.

The few tourists who dare to visit the island out of season become addicted to the Lesvorian winters – and with plenty of reason. In the winter the island is dependent on the mercy of the Gods, with all the pomp and circumstances that usually surrounds them.