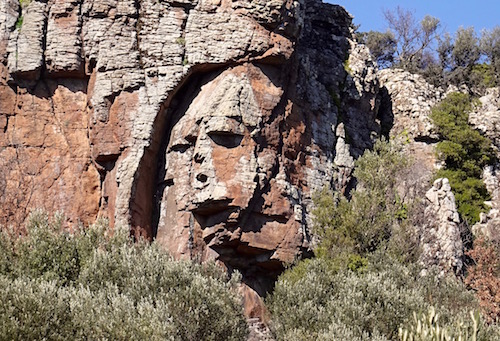 In very ancient times the Greeks were called Pelasgians. One of their kings was Makaras, who settled on the then uninhabited island of Lesvos. There arose cities that were called after Makaras’ offspring: one son: Eresos. Five daughters: Mythimna, Mytilene, Antissa, Arisvi and Issa (or Pyrrha, or Agamede). They all became city states, which throughout history fought each other. Mythimna and Mytilene became bitter enemies, but Issa and Antissa also had their conflicts.

Three cities have survived the barbarian history: Mytilini, Mythimna (Molyvos) and Eressos. An earthquake had Antissa shift into the sea and only some harbour walls and ruins were left, now called Ancient Antissa. Today’s Antissa was rebuilt further inland. Arisvi, at different times usurped by both Mythimna and Mytilene, has grown into the new city of Kalloni, where it has died a slow death and become an unrecognizable part of town. Issa totally disappeared, only leaving some mysterious traces like her portrait in the rocks. The town of Issa was not far from Paleokastro, while some suggest it was near Xenokastrine. Were there three towns? Fact is that the famous Barrington Atlas of the Greek and Roman World(1) has Xenokastrine on its maps. Robert Koldewey, a German archeologist, who unearthed lots of history of Lesvos, speaks of Paleokastro of Issa.

Now only Parakila and the holiday hamlet of Apothika populate this God forsaken region, while some polygonal walls like the Rodoticho still shine as proud memorials of the past. They must have been hiding at the very least beautiful palaces, why else would you plant there these monumental buildings. In the same region are the remains of alum pits. This mineral was amongst othersused as a fixative in the process of dying clothes, like the bright red cloaks the Romans wore. Later the Italian family Gattiluzzi, that reigned over Lesvos in the 15thcentury, took over all alum business.

Some say that Pyrrha was also a daughter of Makaras. The city named after her now sits at the bottom of the Gulf of Kalloni. According to the Greek historian and philosopher Strabo, living in the first era, Pyrrha was then already swallowed by the waves, but some remaining suburbs and the harbour were still habited. Now snorkeling in the muddy water you can see some remains of this town.

It takes a lot of digging to get Lesvos’ distant past out of the earth. Some people do not dig the earth, but in old scripts, like Stephanus of Byzantium (around 470 AC), who was the author of an enormous work, the geographical lexicon Ethniká(2) – 60 books thick! – giving geographical, mythological and religious information about ancient Greece, based on scripts of writers like Herodotus, Thucydides, Xenophon and Strabo. He mentions a list of forgotten cities on Lesvos(3) and introduces yet another daughter of Makaras: Agamede, who also had a town named after her, not far away from Pyrrha.

Places still disappear. About fifty years ago a landslide tried to wipe Chalikas off Mt Lepetimnos. The village resisted the mountain: some houses remained standing, but the inhabitants were not allowed back to their houses because the buildings still could collapse. They built a new village, Lepetimnos, just below the old village. Now it is a real adventure to roam through the ruined village, where the gardens have gone wild and like in a real jungle have overgrown all the crumbling buildings.

Let’s not forget Vrisa. This village, a little above Vatera, got flattened by a heavy earthquake just three years ago and since then nothing has been restored. Vrisa is awaiting the same fate as Chalikas, with the difference that for its inhabitants there is no new village.

There is also a new town: Camp Moria, the second city of the island, just beside the village of Moria, not far away from the capital. It might be a city of tents and containers, but there lives over 20.000 people (in Mythilini about 37.000).

No country wants the refugees from Moria (and other camps), even though their city lacks everything that a European city should have. The inhuman conditions are shocking. Only after Lesvos (also Samos and Chios) revolted with violence against building more (closed) camps, and after the Sultan sent thousands of refugees towards Greece did European leaders realize that something had to be done. But before they could act, there came a virus that turned the world upside down and made thoughts drift elsewhere. And so Camp Moria belongs again to the forgotten cities of Lesvos, with the difference that within it there still live over 20.000 people who have nowhere to go. Now we have to wait to see who or what will wipe Camp Moria off the map.

(1)An interesting atlas, published in 2000 by Princeton University, with big format maps of Europe, Asia and Nord Africa, from the period of 550 BC to 650 AC.

(2)Most of the Ethniká has got lost, only some parts have been saved (epitomê) by a certain Hermolaus.