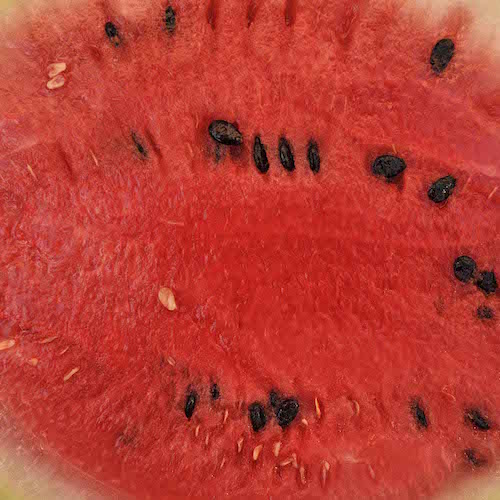 If there is one fruit that symbolizes the lovely hot summer, it is the watermelon. From June/July you’ll find these water bombs lounging under the sun in the fields, ready to get harvested. It is not easy to collect them: the average weight of a Greek karpouzi is about 8 kg, and big ones can easily weigh tens of kilos. A watermelon consists of 95% water, so the red flesh is airy and thirst-quenching. To choose a ripe melon, you have to examine itsbottom, the side that laid on the earth while growing. Some people may flinch seeing the yellowish-white patches, but those are indeed a sign that the melon is ripe: the yellower the sweeter.

The history of the watermelon goes back some 5000 years and starts somewhere in Africa. Although they were not then green on the outside, with red, sweet flesh on the inside. The first watermelons had white, hard and bitter flesh: not a food for gourmets. But they were loved because of their water content. When you stock loads of watermelons in a cool, shadowy place for months they remain good, just like the water they contain. In Sudan, in 1924, they still stored them away for any future drought. When you went traveling you brought a watermelon just like a water bottle. I imagine watermelons hanging from camels struggling through the desert. It is also thought that Egyptian pharaohs were buried with watermelons in case they got thirsty, because the road to the Empire of Death was a long way. Their graves are littered with age-old melon seeds.

Harry Paris is the scientific detective who, through archaeological finds, documents and images, dug up the history of the watermelon. Melon seeds were found in a 5000 years old settlement in Libya and in slightly less ancient Egyptian graves. It seems that from the fifth century BC the watermelon was already being transported up to the countries around the mediterranean, like Greece, where it got the name pepon (the Greek honeydew melon is now called peponi). Doctors likeHippocrates and Dioscorides described the diuretic and cooling properties of the watermelon: children with heatstroke had rinds placed on their heads to cool off.

But at that time those giant balls were not yet sweet. According to some Hebrew documents from around 200 watermelons were placed in the same category of sweet fruit like figs, grapes and pommegranates. In the 14th century in Italy the illustrated Tacuinum Sanitatis was published, based on an Arabic document from the 11th century: a guide to healthy eating. In it was an image of a green striped watermelon, cut open to show its red flesh.

Now we lug about plastic water bottles to still our thirst. And nobody puts half a melon, emptied of its flesh, on his head to cool off, or to get over a heatstroke. Watermelons have been downgraded to after dinner fruit.

You can make an alcohol bomb out of it by injecting it with vodka. Or use the flesh as a meat replacement and grill it on the barbecue. With even these crazy recipes in mind, I still have a bit of a watermelon phobia. On the streets watermelon growers will offer you one, that cannot be politely refused. So you accept this heavy gift, with the risk of backache by carrying it home. And with the best will in the world it rarely fits in the fridge. There is no way around it other than to grab a large knife and cut it — another dangerous job. And eventually you do end up with rinds on your head, a glass of vodka in your hand and the flesh all over your kitchen. I will not have another of these monsters in my house.

Luckily there are the Greek restaurants that, often along with the bill, serve a large plate of watermelon pieces. I am never looking forward to the first watermelon of the season, but in these times of Corona, you’d best eat as much healthy food as possible — and healthy they are, those giant water bombs.