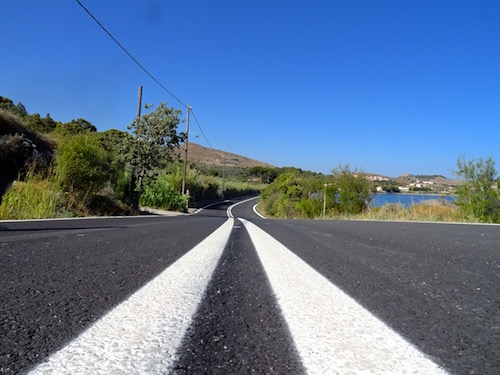 Athens has started to install coloured pedestrian lanes, some of them with public space, straight across the city, connecting all historical places in the center: The Great Walk, that, according to its creators, will become the most beautiful city walk of Europe. 6.8 km of comfort walking that has caused bus stops to be moved and even more chaos in the busy circulation of Athens. It will be hard to get the Greeks out of their cars. Where the money rolls, there are rumors. Like some parts have been decorated with flower boxes costing more than an average Greek month salary. And there is the already fading paint, provided by a company, whose communication company is managed by the sister of the mayor of Athens, Kostas Bakoyianni, who is the son of Dora Bakoyianni, once mayor of Athens and sister of the Greek premier Kyriakos Mitsotakis. (See The Great Walk, a Dutch column by Bruno Tersago).

Athens follows other European cities, making their centers more cycle friendly and better for pedestrians. Long before the corona crisis Mytilini had already started to instal those coloured lanes for cyclists and walkers, centered around its castle, while Athens has just decided to continue their projects in the heat of the corona crisis.

Elsewhere on the island, in the municipality of West-Lesvos, building roads has become the most important activity. The notorious building of the Kalloni – Sigri Road, so often halted, is now making incredible progress. The section Skalochori – Vatoussa has been ready for more or less two years with road signs and all, but according to the signs, is still closed. However, the Forbidden to enter signs are just ignored because – why wouldn’t you drive over such beautiful new asphalt, especially when it shortens the journey 10 to 15 minutes. And knowing that the next part, Vatoussa – Sigri, will present plenty of troubles, slaloming around vans and other working vehicles. There you’d better follow the signs, because of the danger of finding yourself in the wrong lane and ending in an abyss.

A smaller team of road builders, also creating obstacles on the roads, has the task of putting a new layer of black bitumin over every asphalted meter in West-Lesvos, even on recently renewed streets. Kilometers of porous concrete are smeared across the roads, decorated with perfect white lines. Now you can whizz soundlessly across the island.

In 1933 Hitler got some old plans for highways out of a cupboard and started building. It provided work for hundreds of thousands of jobless men and resulted in thousands of kilometers of ‘autobahn’. It alleviated somewhat the crisis then hitting Germany. I guess The Great Walk in Athens will also provide some people with work, but I wonder if that also applies for the asphalt project on Lesvos, where only a handful of people work. Does family of the mayor of West-Lesvos has an asphalt company?

It is alright to look back in time, thinking everything used to be better, but I have learned from the corona-crisis to embrace changes as positive. The terrible shape of the Eftalou Boulevard, where in some parts nature had taken over the road, made it an ideal walking path. This street along the sea was only asphalted a few decades ago; thereafter the whimsical sea tried to deconstruct the road. Now everything is smoothed out with a deep black layer, decorated with shining white side and centre road lines. I have to admit that it looks rather nice. Now that it is winter-quiet in the corona summer (an average of two cars passing each half an hour), I love to walk along the middle of the double lines in the centre. It is hypnotic. My dogs prefer to follow the side lines, because you don’t always hear the approach of the few cars that are passing and the firm new asphalt is an invitation for some drivers to test their racing abilities.

New times, new challenges, even though I am pretty sure that in a few months the sea and winter storms will remorselessly attack the road again, creating the need for a new layer next summer. Whatever the reason for this rage for asphalt in Lesvos during the corona crisis, the white lines have never ever before smiled at you so beautifully.