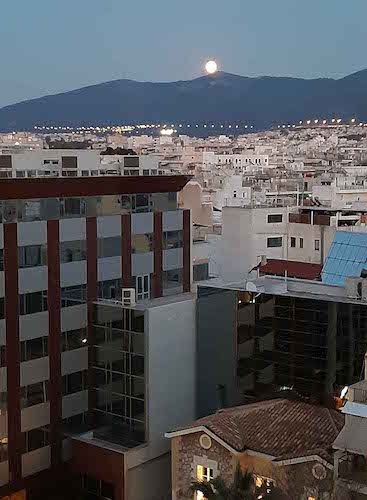 The semi god Asclepius (c 500 BC), a well known healer who it’s said could wake people from the death, became so popular that all over Greece temples were created where the unwell could come and be cured. They were taught to lead a healthy life by, amongst other things, taking wholesome baths and, above all, getting lots of sleep. If Asclepius appeared in their dreams, there was a big chance that they would be cured. I cannot remember having seen Asclepius in my dreams. I didn’t wake up in a temple, but in one of the tens of hospitals that are nestled in the centre of Athens: The Hippocration, an academic hospital that was founded around 1922, when Greece filled up with thousands of refugees after the war with Turkey. A classical building, its beauty still shining onto Vassilis Sophia Avenue, was purchased – later to be expanded with the addition of a newer ugly pink building behind. The hospital was named after Hippocrates, who made his career in the Asclepion of Kos. He strongly believed that illness wasn’t a punishment of the gods, but that it had a natural cause. Secretly I had begun calling out to the gods. What else could I do? On the occasions that I was awake I knew that the only way to get better was to sleep and it’s the only thing you can do when you are constrained to your bed by tubes and other medical machinery.

The very first time I realized that I was still alive was when a window slowly lit up with the glow of sunrise, allowing a tiny glimpse of Athens. The magical light of Athens was an elixir of life for me: I began looking forward to each new dawn. Eventually I saw a piece of the sky, very blue one, and then an ugly brown office building which seemed more or less empty. This complex, consisting of two towers, appeared to be the highest building of Greece: the Athens Towers. One tower having 28 floors, the other one 15. The building was finished in 1971 and was, at that time, the tallest building in the Balkans. Two weeks I had to study these buildings, the seats of mighty banks, international assurance and law companies. There was not much life to be seen in their interiors. Here and there some lights, a lonely man at a huge desk and on the floor above a robot with two antenna sat in front of the window (when my sight got better, it turned out to be a flowerpot with two flowers). These sightings kept me glued to life.

The biggest nightmare of the ICU is thirst. Your mouth is full of granular dirt, dried-up ice floes, your tongue covered in a thick layer of sticky stuff. The only thing that was administered was once in a while the touch of a wet sponge. No point in being asked how I are doing, as I was unable to answer beyond the sound of ‘a’ or ‘o’. Opposite of me lay a woman, firmly tied to her bed by different tubes, connecting to bags with bright yellow orange juice. Which is a tantalus torment when you are so bloody thirsty and even though you know damn well that in those bags there was no juice but some medicine .

I have just shreds of remembrance from the ICU. Liquids were refilled, blood was taken, injections given and then there were gangs of doctors and students (it was an university teaching hospital) who suddenly appeared in front of your bed to study your degraded body with its enormous reversed Y-shaped, betadine-stained incision. I wore no hospital cloth – nothing – not even underwear and I felt naked, dirty and humiliated. There was nothing to be done. I was so drugged that I couldn’t make a fuss.

The whole IC setting had something of a fair or a disco. This was especially true in the evenings, when the heart monitors had their lights blinking in the dark, and tubes running with life-saving juices mysteriously glistened, the bottles with transparent juices looking like hip flasks of vodka (a good combination with the bags of yellow juice: vodka-jus). Greece celebrated her 200th birthday during my stay at the ICU. Everywhere little celebrations: Athens upside down because of all the important guests. High in my ivory tower I wasn’t aware of any of this, even though I had sensed that there had been a cleaning fever. All bottles, tubes and whatever that could shine were polished. The staff, most of them directly out of the Netflix Series Orange is the New Black, chattered excitedly; it looked like they were preparing for a disco evening. That night along came a delegation of important looking men, super well dressed, congratulating everybody (as far as I can remember). They stopped at my naked body, I had no idea who they were; I nodded tamely ‘yes, no and amen’. In any case I found the nights to be pretty noisy: the nurses chattering, flirting and laughing, like they were on an outing. It is like that in my hazy head, believing that all evenings were party time on the ICU. Actually it was good that the nurses were so cheerful – these times being so tough for them. There just wasn’t enough personnel; this is what I really saw after about a week when I was finally allowed to leave that nightmarish floor.