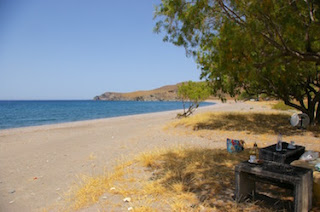 In my previous column I referred to the failing tourist offices in Greece. Besides beautiful posters the country has offered other attractions. Even in ancient times the Olympic Games hosted masses of people. Today athletes’ biggest dream is to win an Olympic medal, only they now have to get it elsewhere. Now more and more people think it better if this traveling circus were to be permanently returned to the cradle of democracy. Many of the countries hosting the Games are left broke, because of the impossibly high cost of security and the expensive demands of the sportbuildings. Watch out, Brazil. Greece had no pennies left after the Olympic Games in 2004. Most sport palaces built then at great expense have turned into glorious Greek ruins (just like the country itself, thrown by Europa into the shredder).

Greece used to be so much loved, partly thanks to Who pays the ferryman, a tv-series whose music nobody ever forgets. The movie Zorba the Greek made sure that the now world famous dance sirtaki – especially arranged for the movie – became synonymous with Greece. And who didn’t pack their suitcases immediately, looking for sun, sea, love and themselves, after seeing the movie Shirley Valentine? Marrying in Greece became ‘hot’ after the happy movie Mamma Mia, which showed Greece as more than a paradise.

Never on Sunday already was a legendary movie, but the Muppet Show made the movie immortal with Miss Piggy playing the part, played in the film by Melina Mercouri. This cultural ambassadress of Greece, after a career of a chain smoking actress and singer, perked up Greek politics.

The newest star in the Greek firmament is Yanis Varoufakis. Last year he gained international fame as Minister of Finance because of his different opinions and self-willed behaviour during the negotiations with Europe. He was reviled by friend and enemy alike because the European Bobos thought him crazy. But now the IMF admits they then took wrong decisions and that the plans of Varoufakis were not so bad. His honour is restored and the people who then distanced themselves from him, now regroup around this professor in economy, who has founded Diem25 to get Europe reformed with open and more righteous rules. It may be possible that this Greek hero will enter the history books as the rescuer of both Europe and Greece. If we give him a chance.

Because yes, it is quiet around Greece. The country having problems feeding both its people and the thousands of refugees stuck in the country thanks to ‘successful’ European politics. It is waiting for a movie about the Greek people, with a hero à la Zorba the Greek, who shares all he has left with those without house or country.

Lesvos never belonged in the Top 10 of Greek tourist attractions. But last year due to the refugees crisis, it became the most famous island of the country. And while tourists stay away, the list of VIPs visiting the island is still growing. No other Greek island has had the honor of having a visit from the Pope – I still cannot keep my eyes dry recalling this impressive event on Lesvos. Also moviestars like Susan Sarandon, Angelina Jolie, some stars of the popular Game of Thrones and artists like Ai Wei Wei, are some of the celebrities who took in the faith of the island.

I do hope that, along with all those VIPs, perhaps some location scout will have discovered what a super location the island is, with landscapes matching those of the Game of Thrones: the dry, volcanic West, the jungle like woods in the centre, picturesque villages like Vatoussa, the azure blue sea licking lonely little beaches like at Avlona, the rough and mountainous North, or the long beach of Vatera. Maybe the next tourist attractor will be as great a series as Who pays the ferryman, and will be shot on Lesvos, the island where on some Sundays you still think you are in the middle of Never on Sunday.