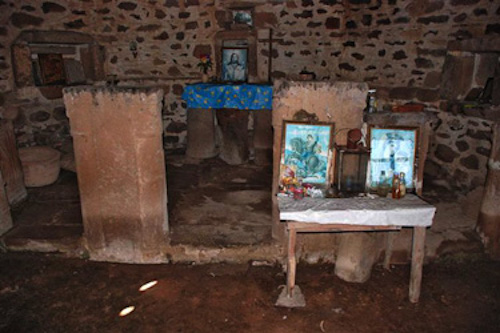 If you organized a race for women wearing high heels, to see who could run fastest down from the castle above Molyvos, through the cobbled streets to the village, I bet the winner would be Greek.

The streets of Molyvos are surely hell for heels but, I am always flabbergasted and filled with admiration when I see the Sunday processions with the priest in front of a flock of women, some on stiletto heels, walking gracefully in their high heels down the narrow streets of the village as if they were walking in bare feet.

I used to walk high heeled all over the world. I even walked parts of the leveda’s in Madeira on high heels. But I do remember that taking them off to walk in the ancient town of Rhodes. I didn’t do it because I was afraid of damaging the warm grey medieval stones there. At that time I still was young and unconcerned, but although I was used to the badly paved streets of Amsterdam, the stones of Rhodes felt better in bare feet.

Those medieval streets were really made for leather sandals. In ancient Greek and Roman times, high heels were barely known. The heel came really in vogue in 1533, after the wedding of Catherine de Medici and the French king Henri II. The bride was a little short and that is why she appeared at her wedding in Paris on a pair of quite high heels, which immediately made her famous with the ladies of the court. England’s Mary Tudor soon followed the fashion and wore the highest possible heels.

Since I now live in in the country and warmth, I wear flipflops in the summer and in the winter I wear clogs, like plastic sabots. I know, they are not the most elegant kind of footwear, but there is nobody here I should parade for, although whenever I go into the town or for an evening out, I take my heels out of the closet.

Lesvos really is an agricultural island. You realize that as soon as you arrive back at the airport in Athens, and see plenty of well dressed people and lots of women struggling on all heights of heel.

The Central Archeological Service of Athens wants to ban these high heeled ladies (and gum chewing people) from its archeological sites, like the Acropolis and the Epidavros theatre. The Service says high heels (just like splats of chewing-gum) are bad for the old marbles and stones.

I doubt this ban will ever extend to Lesvos which does not have that many grand archeological sites. The petrified forest can never be threatened by high heels — and how would you dance on those petrified trunks? Anyway it is already forbidden to touch the exposed trees. The castles of Molyvos and Mytilini don’t have marble floors that could be spoiled by stilettos and the early Christian church of Georgios Demetrius close to Ypsilometopo does not even have a floor to damage. This nearly forgotten little church has already been got desecrated by cattle using it as a cowshed. In one corner you will find a tiny fragment of what once must have been a splendid mosaic floor. The rest has been destroyed by the hooves of hundreds of goats and sheep.

Instead of measuring the damage caused by high heels the Archeological Service should pay more attention to neglect of so many of its archeological sites, some of which are not yet unearthed. Lesvos has plenty of lost treasures: the ancient towns of old-Antissa and Pyrghi, the ruined castle of Sigri, old watermills, the unknown graves at Palios, the old Roman waterways and so on (12 churches of Lesvos are listed on the 100 most endangered sites by the World Monument Watch). If we read the story of Peter Green about the history of Lesvos ‘Lesbos and the genius loci’ one of the chapters of his book ‘Classic bearings’, it is clear that there are still plenty of archeological treasures hidden beneath in the Lesvian earth.

I have never seen the castle of Mytilini from the inside, so I do not know if the concert there on the 4th of July by the German pop group The Scorpions will be performed on an earthen ‘floor’, like the floor of the open air theatre within the castle of Molyvos. Actually, it is a small field of grass on which they place a podium and a stand for concerts. Maybe this place once had stone or marble floors, but they were removed a long time ago to build houses and other buildings in the town. So, you are welcome there in your high heels, but leave the chewing-gum at home. However, a warning for the high heeled tourists who think Molyvos is quite a challenge: take a shoe repair kit with you, because the nearest shoemaker who can fix your heels is in Kalloni.