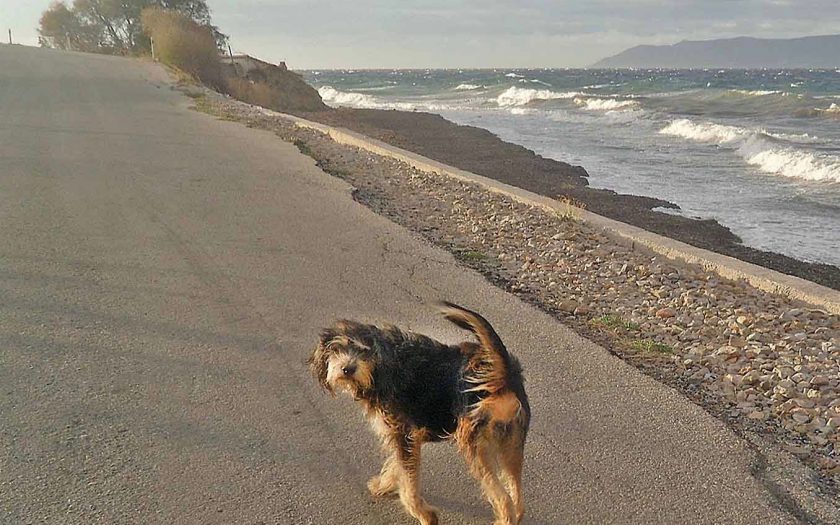 It may have been spring that brought so many Greeks out of their houses. Or is it the lockdown? When you forbid something to a Greek, he will do all he can to go around that ban. Greeks prefer to ‘walk by car’, but these days I have seen a record number of Greeks taking a stroll on two legs. Molyvos shopkeepers, normally bored and cradling a cup of coffee as they wait for customers, now wander along the goad paths and roads of Eftalou. During the last warm days the boulevard has looked a bit like one in Brighton and I suspect some of the unknown car drivers are indeed having a ‘walk by car’.

A new rule added to the lockdown is that you are no longer allowed to sit on the beach, or have a swim and fishing will be only for people who have proper papers to do so. It’s not yet summer or swim season, but it is fishing season. Lots of Greek men on the island love to float in a little boat on the sea while fishing and smoking. It even brings food to their homes. Now I suspect those fishermen have changed their habit and go instead to the fields in order to have at least some food on the table.

In Holland clever asparagus growers now sell these delicacies from cars at the side of roads. Those thick, fat, white asparagus do not grow here on the island, only their thin-as-a-knitting-needle green brothers: wild asparagus. On the document that you have to bring whenever you step out of the house there is no number for ‘foraging in nature’. Most island residents use B6 – to stretch the legs or walk a dog – to go off into nature. I have never seen so many asparagus hunters here in the neighbourhood. I normally have the place to myself, but now no asparagus meals fill my plate.

I suspect some Greeks have also suddenly acquired a dog, so that they can have fresh air while walking their dogs under rule B6. I’ve never seen so many Greeks on the streets with their dogs, neatly on a lash. I know well which dogs live around here and now I’m seeing plenty of new muzzles.

Everyday with my dogs and carrying a hand written B6 form I pass a gathering of Starred Agamas (the grey brown lizard Stellagama stellio). Big or small, they all lay criss-cross, baking in the sun, shooting away between the rocks whenever they sense the smallest danger. I am not a danger for them, I even give them a friendly greeting each day, but even so they are afraid of me and disappear rapidly, only occasionally giving me some time to study them. On White Thursday – the day Easter eggs get painted red (nowadays also in other colours) and the traditional Tsoureki (bread) is baked – the gathering lizards stove away so fast that I thought I saw a bright green arrow amongst those grey stars. So I stood perfectly still, and waited until a first brave toddler reappeared to nestle into his place in the sun. Thereafter came a bright green lizard. I wondered if some lizard got under a pot of Easter-egg-paint. Or was it an intruder? Or just a friend coming over for Easter?

With Easter approaching here in Greece it is strictly forbidden to visit friends or family. It is forbidden to go to holiday homes in the country, or to a hotel; most of which are in any case closed, and the islands are now forbidden lands. The police have threatened to seek out with drones those people that might secretly roast a lamb on a spit above open fire; this is souvla and also forbidden. The most difficult ban is the one for churches. The pappas this year will have to recite their services without a pious but chattering public. The Holy Fire (like always flown in all the way from Jerusalem) normally available during the Eastern Midnight Mass, might be better distributed by pizza couriers, to avoid a massive gathering outside of the church. This Easter will be a strange one in Greece. Let’s look hopefully to the Assumption of the Virgin Mary.