The son of Coronis 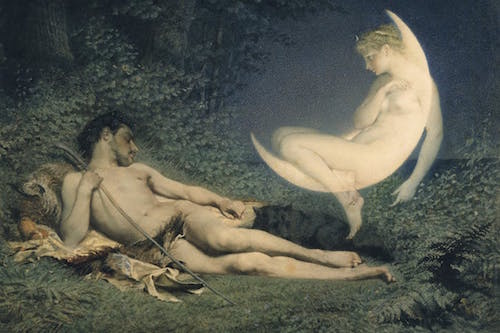 On April 7 they announced a Pink Moon. Pink? I have heard of a Red Moon, a Blue Moon, and a full moon or a half-moon that sometimes swings in the sky as a broad wide smile. So I couldn’t wait to see the Pink Super Moon to appear.

A harsh northern storm had blew away all clouds from the sky and there she came from behind the mountains: a normal full moon. No pink colour, even not a shade of red, but as white as a shining bride. She sprinkled her silver light all over the island, an event that each month is worth looking at. This time she didn’t seem to be bigger nor with strange colours. The full moon in April is not named after its colour, but after the moss pink (Phlox subulata), flowers you may find around this time of the year.

Selene, the Greek moon goddess, parades at night on a horse along the celestial vault, or she rides a wagon driven by two snow white stallions. On her head she wears the moon as a bling-bling crown, or she hides her in a fold of her flowing mantle. She gave her love to Endymion, a young and handsome shepherd, who wished he could remain forever young and beautiful. Zeus fulfilled his wish and had him glide into an eternal sleep. This way Selene each night was on her way to her lover. Until the sciences got involved.

The first man who proved that the moon was no goddess hopping across the sky, was Anaxagoras. He lived in the 5thcentury BC and thought that, just like the earth, the moon was a rotating rock, shone upon by the sun, a blazing piece of stone. With his ideas he also could explain eclipses that used to cause plenty of panic in ancient times. He was sentenced to death for offending the Gods with his theories, but was saved by his good friend and statesman Pericles. He lived to pursue his philosophies in exile. In the end a crater on the north pole of the moon was named after him.

In Greece during the lockdown each time you want to take a little walk, with or without a dog, you need to sign a paper with your name, time, place and signature or send a sms: B6. Going shopping is number B2. I did not see an appropriate number to be allowed to go and admire the moon, so I sneaked out of the house without any paper. The fields glittered in the moonshine, the mountains in a light blue shine. Full moon nights always feel a bit like magic. Until I heard something rushing away in the long grasses and I was brutally woken up from my musings. It is the season that the snakes wake up from their hibernation and – who knows – were perhaps also curious to see the moonlight. I went straight home and slept a dreamless night.

The symbol for a doctor is a snake curling around a wooden stick. This symbol comes from the myth of Asclepius. Asclepius was a son of the mighty Apollo and – guess who – the princessCoronis! This lady, already pregnant with her son, fell in love with a mortal handsome man, making Apollo so angry that he had herkilled. But he saved the baby. Asclepius was brought up in Epidaurus by a centaur, who taught him all there was to know about medicine. Asclepius became that accomplished that he even could bring people back from death, which made Zeus worried and finally angry. Zeus threw a crackling bolt of lightning at Asclepius, leading Apollo to seek revenge by killing the Cyclops (makers of lightning). What is Zeus without his lightning? Zeus got Asclepius back from the netherworld and this is how Asclepius became the man in Epidaurus where you went when you were ill. It is said that there he had a kind of spa or hospital, where you were told to sleep a lot. When you eventually dreamed about a snake, you were cured.

I sometimes regret that science and its phlegmatic views has wiped away such wonderful myths. Instead of looking at the moon, I would have preferred to search the sky for a flamboyant Selene and her horses, driving through the sky to find her lover. Or should we listen to the son of Coronis, who tells us to sleep a lot and dream about snakes, in order for this nightmareish corona world will heal?

Scientists still know little about this unknown virus, giving space to plenty of new myths invading the world: smoking makes you immune to the virus, or that 5G is causing the illness. Now that the snakes creep out of their beds in order to announce the summer, it is said that this season will end the lethal virus. That is a tale I really want to believe in.