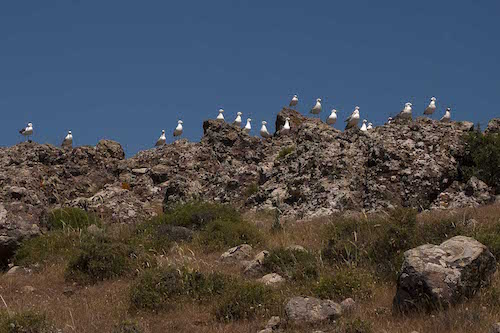 In 1970 the book Jonathan Livingston Seagull by Richard Bach became a worldwide bestseller. It is a fable about a seagull who wants more than what’s on offer in the colony of gulls where he lives and where life mainly consists of searching for food. Jonathan wants to fly and he spends so much time just flying that he is rejected by his family and finds himself alone in the world. He meets other solitary gulls who teach him to fly better, even teach him to get to another universe, where all gulls have made an art of flying. Eventually Jonathan returns to earth, where he teaches his art to others: teaching them how to be themselves.

When I see a flock of gulls gracefully sail through the sky, I often think back to Jonathan Livingston Seagull: I would love to join them flying. For me seagulls are a symbol of freedom. For the old Greeks they represented the sea goddess Levcothea, once Ino, the daughter of Cadmus. This princess had to look after the baby Dionysus, making Hera so angry that she turned Ino insane. Ino became so sad that she jumped into the sea with her son Melicertes. Then the Olympic Gods took mercy and they changed Ino into Levcothea and Melicertes into the god Palaemon.

On my daily walks along the sea, on the rocky parts of the coast I always see meditating gulls. Like Tweedledum and Tweedledee, just close to the hot springs of Eftalou. One above a rock sticking out of the sea, the other on another rocky point to gaze over the blue water. It seems a mature pair that has committed themselves for eternity: gulls are monogamous and choose (just as we always intend when marrying) a partner for life. Together they take care of the children, who only after four years are ready to leave home, having learned to fly and to collect food — and predict the weather. When the barometer shows lower pressure, gulls tend to retreat inland to adjust to the lower pressure, also days before a storm arrives or an earthquake prepares to bring havoc.

Gulls are that intelligent that they have learned to throw shellfish on the rocks, splitting the shells in order to easily grab the animal inside. A field mouse, a dry land animal, has first to get marinated in the sea in order to turn it into a wet and soft, easy-to-swallow snack. They also master the art in stealing food from other animals. Even a fish caught by a whale is not safe from them – nor a french-fry from unsuspecting tourists.

Seagulls are not popular birds. For example they can get pretty angry when an innocent intruder dares to come close to their colony where they watch over their eggs. I once had a cat in Amsterdam that got attacked by seagulls on the terrace and then developed a gull phobia. I myself remember some scary moments when gulls above my head loudly screamed their disagreement over my presence on their beach.

In Holland (and other countries) gulls can become a real plague: opening garbage bags, making a huge mess of the contents and intimidating people. Here on Lesvos they are more peacefully minded. Seagulls remain mainly along the coast, where there is so much space that they can easily keep their distance from people. They are not seduced by food eaten on the streets, here the French- fries are served on plates in restaurants or taverns, not accessible to seagulls. Here gulls just eat fish, fruit and other biological food.

Pigeons, that other flying pest of cities, can be eaten — seagulls not. Because of their fishy diet their meat is pretty filthy. It’s the gulls’ eggs that are a delicacy. They taste like lightly salted chicken eggs and are a lot bigger.

As far as I know gulls’ eggs are not a speciality on the island, even though there are so many colonies around. On the little island Nissiopi, opposite Sigri, as many as four to seven thousand seagulls breed in spring. Also Rabbit island, opposite Petra, is a popular place to lay eggs and should be called Gulls’ Island (the rabbits that once hopped around having perished a long time ago).

I do not know to which colony Tweedledum and Tweedledee belong. Just like Jonathan, who occupies his rock alone and lonely in another part of Eftalou. Sometimes I see a medium sized colony floating on the sea or chasing a fishing boat; but where they keep their nests: I have no idea. It is better not to know, because since I read about gulls’ eggs I have become very curious about what delicious dishes can be made with them.