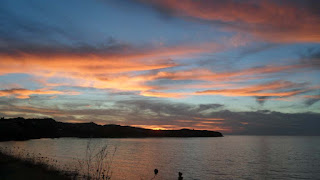 How dangerous countries such as the Netherlands, France or England have become due to its extreme weather? In Greece we survived the past August full of dangerous high temperatures, far above 30 °C. Though it wasn’t really extreme weather because the mercury did not break any records.

I think that some of those extreme downpours, which are a plague for other countries, can also increase the blood pressure of the Greeks: at the end of the season they dream of many centimetres of rain, because nature has completely dried out.

In the area I live Mary did not drop any tears around her Ascension. We had to wait until the end of September when the gods finally emptied some buckets of water. The traditional August shower however did come down on other parts of the island, like in Mytilini and Kalloni, and blessed the rivers with so much water that already in August they formed a nice paddling paradise for the black storks.

Kalloni is the most dangerous place on the island due to extreme weather conditions: there you will always find the highest summer or the lowest winter temperatures. If the gods decided to pour some water from heaven, it mostly will fall around Kalloni. In the summer the rare showers are received with lots of joy because it means a temporary relief from the heat, in the winter the rains are cursed because of floods.

I have a stunning view over Turkey from my house, where even more extreme temperatures can occur. This summer I observed that the Turks were also spoiled with lots of unreliable clouds. I often saw pitch black masses hanging above their mountains, promising a fantastic Sound & Light Show. I prayed to Maria to push those dangerous looking, thundering clouds towards the island. You saw curtains of rain and sizzling lightning slashing on hill tops and then on sea: you could smell the sweet perfume of this heavenly water, but over and over again those hydrogen nests fell apart to dissolve into the blue sky. So disappointing that high blood pressure could cause your heart to stop.

During the last days of September Turkey again is regaled: enormous white bulging cauliflowers grow and threaten the frontier. I am wondering how the refugees deal with bad weather. They travel through extreme hot Turkey to cross the sea in dangerous boats, even during siesta times, and when heavy weather bursts out they have no homes to shelter.

Would smugglers take into account dangerous weather? Last month there was a strong wind blowing: no extreme force, but I would have let out a weather alarm for those flimsy dinghies they push the refugees on. At least three people that day did not reach Europe.

Now again those cauliflower clouds start colouring black and I am wondering if the refugees are already soaking wet before they even take place on these frightening and overloaded boats, which continue to make perilous journeys.

The nice weather this summer did not care to stop, just like the high temperatures. Until Monday September 28, a well known day for moon lovers and croakers: that morning you had to get up extremely early to see a rare phenomenon. When yesterday evening I looked at the grey sky there were no stars to be seen. Only a small spot of light betrayed where the moon was hiding behind the clouds. But it should have been the shadow of the earth making the moon invisible instead of humid clouds on the brink of bursting into dangerous tears. I was very disappointed, went to bed, closed my eyes and travelled far away behind the clouds to dreamland where I could not see the eclipse of the moon.

The next day the media presented lots of sensational pictures of a blood red moon, the colours she takes when an eclipse occurs, an event to be seen again only in 2033. I have been praying so often for dangerous clouds to come over. But on the island of the sun, on a day that an extremely rare phenomenon could have been visible, a cloudy lighted spot, not even colouring red or pink, was the only reward for a nearly sleepless night.

In Turkey, during the last weeks, a oneway ticket by dinghy to Lesvos has become extremely ‘cheap’. The price sunk from 1500 to 300 euro. It must have been Big Sales Days in Izmir: even in this smuggling business they know when a season ends. But as a bonus the shelters on Lesvos have much improved: rescuers have landed on the island as a flock of birds. Refugees no longer have to endure long walks in rain and darkness, because busses and other transport now finally has been provided for. And if pressure of blood because of dangerous travelling has been risen too high, plenty of medical posts also have been installed in different places.

I wondered if smugglers charged extra money for the fare during the Night of the Superbloodmoon: on such a rickety and dangerous dinghy you were seated first row under the heavens to see this Moonshow. But I guess that even the refugees that night will have been extremely disappointed when arriving at the Lesvorian shores.

Most refugees come from countries where in the coastal region reigns a Mediterranean climate and where in the outback rain and cauliflower-clouds are not a daily phenomenon. They are not used to rain and cold. Most of them want to go to the North of Europe, but they have no idea to what places they are heading: to countries with dangerous and extreme weather conditions and where no siesta regulates blood pressure.