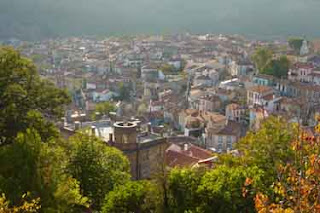 (The village of Agiasos)

“The only assholes we met in Greece happened to be in a lovely chapel in Agiasos: a gang of teenage boys who threw rocks and spit at us as we left the chapel.” This message on FaceBook shocked me: I have never heard of something like this happening on Lesvos.

Many years ago a friend once said that people from the charming village of Agiasos are crazy. I am somewhat suspicious and do not always believe everybody. The ancient psychiatric institute above the little town, now closed for tens of years, still fuels the imagination, even though it no longer functions as a mad house and its location is still called Sanatorium. It is possible that these mountain villagers are just a touch crazy, because their carnival is the hottest of the island, performing theatre is still a great art in Agiasos and the people there have always taken up arms against whomever dared to grab their liberty.

A wellknown saying on the island is: “Never take a woman nor a donkey from Plomari or Agiasos”. Well, I know some women from these towns and they are very fine people. And donkeys? About ten years ago you could still find plenty of donkeys roaming the streets, especially around Plomari. Nowadays these donkeys (except for those who are engaged to joggle safari’s around Molyvos) are part of the list of the Levorian Big Five (wild boars, wild mountain goats, wild horses, dolphins and donkeys). Wherever they come from, they soon will be on the list of endangered animals, even though one or two farmers – due to the crisis – have exchanged their cars for a donkey.

The friendly face of Greece is showing some cracks, also here on the island. Some foreigners who have lived for years in Molyvos (or come regularly) are truly shocked after attending some of the meetings about the help for the refugees. Just as Europe has showed its true face when debating with Greece, some Molyviotis have shown theirs. Are all Greeks nice? No, I am afraid not. And by the way, people from Molyvos are seen as arrogant, especially by their neighbouring villages.

Not long ago I told my Greek neighbour about a plan to make a transit station for the refugees in the village of Klio. She immediately answered that her mother taught her that the best people of the island live in Klio and in Sigri. This is just to remind you that there are also good villages on the island.

Are there any bad tourists? Yes, of course. The month of August is notorious for its catastrophic tourists, like arrogant Greek towns’ people, who boss the islanders around like donkeys. This group of people although was dearly missed last summer; most of them did not show up because of the crisis.

July and August also are the months for the foreign sun-beach-and-sea folk, people who do not come further than about fifty meters from their hotel. As long as the sun shines, they do not care if they eat paella, souvlaki or kebab. They move from their beds to their sun beds and are not ashamed to lie naked under the sun, regardless if there is a Greek family with children next to them on the beach.

Last week I was on a family beach and a lady with dangling bare breasts strolled along the tide line. She enjoyed herself with the water and the sun, and behaved as if she was all alone on the beach. The day before I had been in tears because of the endless stream of refugees passing by this beach. In the soaring heat, at least twenty boats arrived with refugees! Women, children and lots of men, all looking tired though chatting loudly, walked happily past this beach, many of them coming from a culture where a woman cannot even show a bare toe. Imagine if this topless lady had then walked this beach…

Since the publishing of the picture of the little Syrian toddler who washed ashore on a Turkish beach, the numbers of the rescue people have explosively increased. Some of them dress – a bit naïvely – in the tiniest of t-shirts or bikinis. On the nudist beaches it even can be worse: naked sunbathers remain comfortable on their beach towels while a boat with refugees washes ashore and the nudists are even too lazy to put some clothes on.