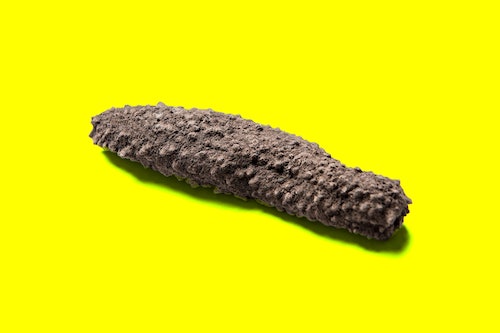 Lots of ingredients for Greek dishes have been imported in earlier times. From their far away travels and campaigns, explorers and military men like Alexander the Great, brought home exotic fruits and vegetables. This is how tomatoes, aubergines and cucumbers were slowly integrated into Greek cuisine. However there also are products that existed in Greece for a long time, but remain unknown to Greek cooks: like sea cucumbers.

A sea cucumber looks like a dark, thick dick, ‘a sea willy’. It has an endoskeleton and likes to roam over the bottom of the seas. It is close family to starfish and sea urchins and even though his appearance is truly unappetizing, eating this strange creature is very much loved in Asiatic countries. In China sea cucumbers are among the top delicacies from the sea, along with abalones (ear shells), shark fins and fish maw (swim bladder).

Strange people, the Chinese, eating those things; but the Greeks also have some strange dishes. Like the head of a lamb, where you spoon the brains out and the tongue is also considered a delicacy. Popular too are the organs of lambs (or pigs). They may end on the barbecue (Kokoresti), or in a cooking pot (Gardoumbakia); some end up as the ingredients for the famous soup eaten at Easter (Mageiritsa), or the anti-hangover soup (Patsas). It is put into sausages (Splinantero and Tzigerosarmades). On Lesvos, the testes of lambs are known as one of the best dishes to eat together with ouzo.

The tentacles of octopus are beloved. Sometimes even their inkbag gets fried. The yellow or orange genitals – roe – of the prickly sea urchins are another much appreciated side dish. Sponge fishers from Kalymnos pick sea creatures resembling rocks, called sea figs (in Greek spinialo ). They put them in a bottle with sea water and olive oil, keeping them as a source of vitamins for their sometimes weeks’ long sea trips. Meanwhile sea figs are not only eaten on the sponge ships (and on Lesvos) but have become a popular trend in Athens. Greeks also like to eat snails, fried mushrooms (pèperites) and wild vegetables. In some regions for example a salad with wild flowers is served (kourkoutzelia).

The biggest group of fishes, ray-finned fishes, have a swim bladder: a kind of balloon filled with gas that keeps them in depth without spending too much energy. Fish maw enough in Greece. Not sharks. They are a rare phenomenon in the blue Greek waters and therefore you will not find shark fin soup on the menu. But Greeks adore to eat shellfish in the winter, like oysters, mussels and Venus clams. I didn’t know that abalones are also edible. I have never seen them served in Greece, even though their shells with the beautiful Mother of Pearl insides are often to be found on the Greek shores. Sea cucumbers also live in the Greek waters.

These ‘sea willies’ used to be only good as bait. However in recent years Greece discovered the Chinese market and now these cucumbers, when picked from the sea’s bottom are frozen or dried and shipped to Asia, where they are sold for a lot of money. Greeks do believe in the medicinal powers of the wild vegetables; the Chinese believe in the power of the sea cucumbers and other healing delicacies. Sea cucumbers are even seen as an aphrodisiac and it is said that it can help in the battles against cancer. No wonder that already on Lesvos there exists an illegal trade in sea cucumbers. It is around the Dodecanese islands that plenty of sea cucumbers – legally – are being harvested. They are probably not yet in danger of extinction (but it is forbidden to gather sea urchins for commercially).

It is strange that sea cucumbers have not been picked up by the Greek culinary trendsetters: the Chinese pay fortunes to eat those sea creatures. When swim bladders are served as a delicacy, they are mostly dried and look like a condom. If you shove that over a sea willy, you will get a super health bomb. This way you can create lots of trendy dishes.

I have tasted most of what is on the culinary curiosity list. I however hesitate to put the ‘sea willy’ on my ‘To-Taste-List’, even though it is said that they help with joint pains (an ailment that starts to plague me more and more). I am afraid a whole study in how to turn such a strange thing into something edible is required, before I dare to serve it to my guests.