Away with the summer holidays 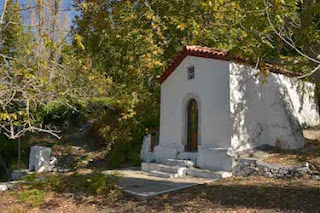 (A little church near Agiasos)

Once a young street dog arrived at a school. His dark loyal dog-eyes lit up at hearing childrens’ voices. The pupils liked him, called him Bubu and gave him food and shelter: Bubu had found a home. Until one day the earth started shaking, walls tumbled down and even at the school stones were flying around. Bubu had never been so afraid in his life: he fled to the fields where no stone could hurt him.

On June 12 (2017) an earthquake destroyed most of the village of Vrisa on Lesvos, including the school. As nobody ever saw Bubu again, they assumed he was buried under the debris of the school. Last week the rebuilding of the school was complete and the school opened with lots of festivity. For the first time since the catastrophe the school bell sounded through the village, and all the children and their parents were gathered. Suddenly there came Bubu, rushing out of the fields, happy that everybody was back, knowing that he would be loved again.

Probably the dog was conditioned and when he heard the bell, he understood that is was safe again in the village. Now that sunlight sets nature on fire, tree leaves changing from green to red to yellow, I wonder if tourists also are conditioned: you just lure them with the sun and some warmth, and they come flying like Winnie the Pooh for sweet honey. But once they are in Greece, they complain about the crowds, snappy waiters and the heat.

Not that Lesvos recently has had masses of tourists. Although last summer there were some complaints about the crowds in the harbour of Molyvos during August. The summer also had some heat waves – a well known phenomenal in a Greek summer – and again the tourists could not sleep, burned alive on the beaches and started to complain. I am wondering why those people come back again and again, as if there is no other time to visit Lesvos.

It’s also a bit strange that Demeter, goddess of agriculture, celebrates in the summer the half year that her daughter Persephone is allowed out of Hades. It’s only when Persephone goes back and Demeter shed her tears, that the real party can begin: autumn is there and nature comes back to life.

Fthinoporo (φθινόπωρο) is the Greek name of this colourful season, meaning that the fruit will fall (from the trees). This means plenty of labour: figs have to be dried, walnuts gathered from the trees, grapes trampled, apples collected. High in the mountains, surrounded by lovely colouring woods, Agiasos prepares for the chestnut festival and people get ready for mushroom hunts. Quinces and pomegranates are still clinging to the trees; they will be the last fruits of the autumn, before the big olive harvest begins and before oranges and lemons decorate the winter trees like colourful christmas decoration.

Last week it rained chair legs on the island. That is what the Greeks say when it rains cats and dogs (another funny expression we do not have in Dutch): “Βρέχει καρεκλοπόδαρα!”. The earth gave a sigh of relief: finally something to drink. All dust washed away, the horizon swept straight again, and the sun gloriously back in the sky. The autumn definitively had arrived, but most tourists were gone. A bit dazed, the island now shows her new fresh beauty: a glittering satisfied sea inviting you for joyful swims, trees changing colours like magic balls, a low light that will make photographers salivate and some deserted terraces where one can sit with an ouzo, enjoying the warm sunlight.

Yesterday when I took a walk in the sunlit, glittering woods and the first chestnuts thudded down right beside my feet, I wondered if the tourists were wrongly conditioned. The summer wears none of this beauty, nor enjoys the delicious temperatures that only cause a bit of healthy sweat. In Agiasos thousands of local souvenirs, next to boxes full of chestnuts, apples, quinces and beans, await the lonely tourist who dares to visit the village. Agios Dimitrios, that little hamlet full of sources, nearly forgotten on the old road to Agiasos, is like a dream location for a movie. Along with the sweet perfume of the damp earth, the colourful little traditional taverns and the intensity of the sunrays upon the trees, it appears like a master work of a painter.

If ever the media picks this up, I am sure that tourists can be newly conditioned to forget the overheated summer holidays, to let the first autumn rains be like the schoolbell for Bubu, and go to Lesvos for an unforgettable autumn vacation.