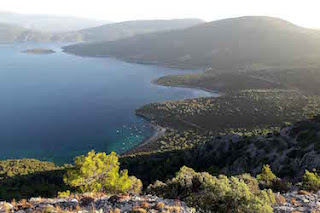 Island hopping. That’s what you did when it was the drachma that rolled around in the Greek economy. From Athens by boat to Mykonos, Ikaria, Samos, Leros, Kos. Imaginary lines from dot to dot crossing the blue Aegean sea. From the beach on Telendos, back to Kalymnos, Patmos, Naxos, Amorgos: one idyllic island after the other. So much choice in this sunny island republic. On the ships there were islanders burdened with parcels and island hopping backpackers, and – when the wind took over – puking people. Nothing unusual, in those times, when you travelled from one paradise to another.

Recently when I sailed to Samos plenty of memories of island hopping came back. Waving people welcoming you at the harbours, screaming for your attention: they had the best pensions at sunny little beaches, to which they transported you in the back of their pick-ups and where plates full of tomatoes, cucumber and feta did not stop appearing on the table. Picturesque villages full of hospitable people, bellowing donkeys, cheap wine and strong headed ouzo.

Now there are other boats: with good toilets, comfortable chairs everywhere, apart from the local traveller only a few foreign tourists stand at the railing, even though you are still able to go for only a few euros from one island to another one. Tourists nowadays do not have time to travel, but land immediately on their destination where they settle on a bed in the sun.

Samos rose like green jade straight from the blue Aegean. The harbour of Vathy meanwhile placed to the other side of the bay. Forests everywhere. A beach-hopping-island, thanks to its numerous lovely little beaches, light blue sea, white sand or soft pebbles. The Samiotes understood that these white pearls attract tourists. Most beaches are fully supplied with showers, changing cabins, good road signs and – the most important – sun beds. Sun loving people obviously like company: on most beaches a view of sand was blocked by all those sun mattresses.

Kokkari, once an idyllic fishing village, now buried by restaurants, little hotels and pensions. The tiny fishermen’s houses at the beach – where once there were always women shelling peas, net repairing fishermen and screaming cats – forever lost to the crowds. Now it is only beach, sun and sea pleasing the tourists.

Samos does not like its history: everywhere new houses adorn hills and mountains, barely leaving space for old restored buildings. In contrast to Lesvos, time here has moved on and old times rolled over to create a modern island. Lesvos is proud of its many old, beautiful villages. On Samos they all seem to be shiny new.

Only Karlovassi looks pretty undisturbed, the place where history did not fade: enormous, old, empty tanneries and tobacco warehouses, even dilapidated or restored, rememberance to the old times when this little town was flourishing. Now she proudly shows her old, industrial culture.

It is the tourist business that brings in the money these days. And the wine. I was expecting to see grapevines everywhere, but there was more wine on the table than grapes in vineyards. Besides the world famous sweet Samos wine they make plenty of white wines and I even tasted some local ouzo (none of which was anything compared to those of Lesvos). The white wines (the red I did not drink) however are excellent and can easily be compared to those of Lesvos’ neighboring island Limnos.

Viti culture and sheep do not like each other; no four-legged woolies were to be seen, so the cheese mostly came from Lesvos. Although you do find a few beautiful, sturdy goats around with huge curvedhorns. The island looks clean, not much garbage and I wonder if that may be due to the jackals, still living on Samos, who sneak out of the dark woods at night to clean up the garbage.

Another product of the island is honey. The Cave of Pythagoras can be found along a little dirt road that winds deep into the mountains, ending at a small, cute wooden cafe that offers refreshing drinks and pots of honey. You probably need at least 3 tablespoons of the honey and 3 liters of water to climb up the 380 stairs leading to the Cave of Pythagoras. I did not venture up those steps. Not only was the temperature attempting to reach 40 C, just looking up to the cave high up in the rocks caused my fear of heights to roar through my body. So instead I bought a pot of honey and afterwards I regretted that I did not buy half the shop because I’ve rarely tasted such good honey.

Coming back to Lesvos I immediately realized why I have lost lost my heart to it. Lesvos is not only much bigger than Samos, but the volcanoes kneaded it into a unique varied island, with fertile, green woods and little romantic beaches under steep walls of rocks, as well as wide landscapes with bare desolate mountains. One of the highest tops of the Aegean – the grey, bold Kerkis in the south of Samos – did impress me a lot, but only because I’d forgotten that the granite Olympus towering over the centre of Lesvos, has the same beauty.

But what I learned most from this trip is that travelling on a ship is so relaxing and surprising. Roaming from deck to deck, floating over the blue water, silhouettes of a sturdy Turkey and mysterious islands passing by, spotting playing dolphins, and of course being lead to beautiful destinations. Why have we forgotten how to travel comfortably?