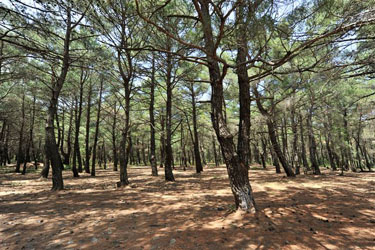 When talking about Greece, pine trees don’t immediately come to mind, although there are plenty of pines amongst the many other trees on Lesvos, where throughout all seasons the large pinewoods colour the heart of the island green.

The pine even has a minor role in Greek mythology. The story is brought to mind of the bandit Sinis who used to bent pine trees to catapult people into the air or alternately  split them in half. King Theseus, known as the hero who killed the Cretan Minotaur, gave Sinis a bit of his own medicine and so the road to Athens became safe again.

Pan, God of the woods and animals, liked pine trees and nymphs. One day he fell in love with the wood nymph Pitys, who was already being courted by Boreas, God of the Northern winds. But because Pan made much less noise than Boreas and his stormy winds, she choose Pan. Boreas, infuriated by her decision, let Pitys fall from a high rock. Pan found her lifeless and changed her into a pine tree.

Since then, when the northern winds are blowing, Pitys cries and her thick tears become the resin that drips from the trees and which in turn are used for retsina. Pine resin is used for many other purposes and until the end of the Sixties resin was still harvested here on the island.

Christmas trees also belong to the extended pine tree family Pinaceae, but the ones which are used in the West of Europe for a decorated tree (like a spruce or a fir tree) do not grow on Lesvos. On the island we mainly find Aleppo pines, black pines, Turkeys pines and here and there Umbrella pines. Of course those can be used also as a Christmas tree, although the smaller ones have limp branches with only a few needles and when decorating the tree it requires great effort to prevent all the lights and balls from crashing to the ground.

Pinecones, the fruit of the pine trees, are other beloved Christmas decorations. And there are plenty on the island. They can be painted gold or silver or just used in their natural colour. They also serve very well in the barbecue or as kindling for a stove or an open fire. But before you throw them in the fire, consider that they have taken quite some time to grow: some of them up to 1.5 to 3 years. I am wondering if that is an explication why, for two years now, the Umbrella pines around my house have not produced any pine nuts. They also might need several years to grow.

Pine trees have more peculiarities. Like the trees I used to call creeping pines, in Dutch ‘kruipden’. Officially a ‘kruipden’ is not a pine tree crawling over the ground, but a Mountain Pine (Pinus mugo: short pines growing on high mountain slopes. Quite different from the big pine trees, they, instead of standing tall, creep over the earth or forming T-junctions in the air with their branches. I have some of these around the house and seeing them makes you happy: a special kind or a stubborn pine that perversely grows side ways.

I do understand why the pine tree was a favourite of Pan: this beautiful tree is stubborn, evergreen and has a lovely fragrance. When just before Christmas I took a walk to the Pessas waterfalls, I became sad because there still doesn’t seem to be much running water: the farmer that illegally drains the water has still not been stopped. But my walk went straight through pinewoods where you can still see the rusted iron buckets for the tears of Pitys and thanks to the drizzly weather and the strong perfume of the trees I got into a Christmas mood.

And now we are approaching the second celebration day of the year. In many countries Epiphany (or the Three Kings) is celebrated, but in Greece it is also the day on which the priests bless the waters, boats and seamen. January 6 is also the day when traditionally all Christmas trees should be banished from the house and in so doing loose that great aroma of the pine trees. But even though there are no real Christmas trees, here on the island there remain plenty of beautiful trees, whose fragrance we can enjoy: sweet and fresh, a stimulating scent for the new year!