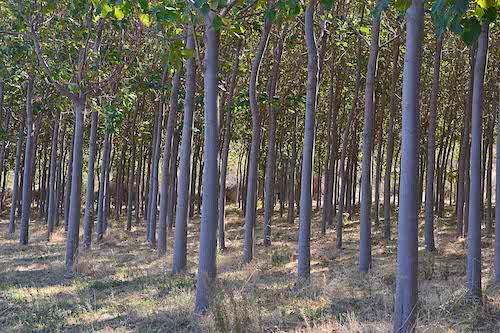 (The Anna Pavlovna wood in Sigri)

Soft whispering pines and silver-green olive trees are in the majority on Lesvos, followed by fruit trees, like apricot, cherry, prune, wild apple, along with pear, fig, almond and walnut. At the bottom of this list of trees on Lesvos lies the chestnut. We find them here and there, but most chestnut trees are around Agiasos. This area is one of the six greatest chestnut regions of Greece.

It’s such a long time that the chestnut trees have made the Greeks happy with their wood and fruit, that it is natural to consider the chestnut tree as native. There is even a myth explaining how the nymph Neas preferred to be changed into a chestnut tree, rather than to give in to the brutish advances of Zeus. This is how the chestnut tree became the tree of Zeus.

Each autumn when I walk in the golden glow of the chestnut forest and for hours become addicted to the picking up of chestnuts, it becomes my intention to make lots of tasty chestnut dishes. Rarely though do I get any further than roasting some of them on the wood stove. I keep delaying the nasty and boring job of extracting the chestnuts from their jackets, and in the end, worms find the fruit and have a jolly good party devouring them.

I often wonder how they peeled chestnuts in ancient times, because these nuts were being eaten centuries before Jesus came into his manger. Chestnut flour was a staple food in regions where they couldn’t grow cereals. The Greeks introduced chestnut trees to their colonies in Italy, where they became an important staple food. And still you will find in Italy plenty of chestnut flour and chestnut bread. Imagine the work that must go into making chestnut flour! For the most part, in Greece, they simply roast them. And Greeks, like me, probably do not like to spend days trying to peel off chestnut skins.

On YouTube I happily came across a new method of peeling chestnuts. Of course I immediately tried it out: It works! Cut the chestnuts in half, have them swim for two minutes in boiling water, drain them, pinch them with a plier in their buttocks and hoppa! – half a chestnut jumps out. Do not blanch too many at one time, as they must be still hot when being peeled. After that you may roast or boil them. Ideal for making mountains of chestnut puree.

The chestnut woods above Agiasos stretch out across several mountains and only a small part of the many chestnuts end up on a grill or in boiling water. Were they all to be harvested they could provide enough for the whole of Greece. Yet Greece imports tons of chestnuts. Such a pity, all those chestnuts in Agiasos just laying there on the colourful slopes as pearls for the swines. Literally, because the wild boars are back in the region around Agiasos. They will have party after party with all those chestnuts.

Chestnut trees are also cultivated for the wood, which has a warm colour and is ideal for making furniture, windows and exterior timber. It’s a great burner in a wood stove. When walking amongst those majestic chestnut giants you might feel like picking up lying around pieces of wood to carry home. But chestnut is a hardwood and pretty heavy and I don’t believe that you are allowed to take away all the wood there.

There’s no way to burn the famous petrified trees from Sigri in your wood stove. But Sigri has another kind of special tree, very rare in Europe: the Anna Pavlovna. Originating in China, these trees form a small wood in Faneromeni. They are named after the Russian wife of the Dutch King William II, Anna Pavlovna. It must be a real spectacle to see the Anna Pavlovna’s blossom in April – May, with their bell-shaped pink flowers. These ornamental trees are also grown for wood, because it is a hardwood and they grow very quickly. Great for making furniture, music instruments or skis. When I embraced one of the trees, I felt like I had a stone pillar in my arms. But when I picked up a branch from the ground I was surprised: the wood was as light as a feather. Also the seed pods weigh next to nothing and were in earlier times used in China as packing material. I do not know how Anna Pavlovna wood burns in a stove, but I would have loved to have some. No more dragging heavy pieces of wood from the shed to the wood stove. Great wood for the elderly! But all trees were sold out.